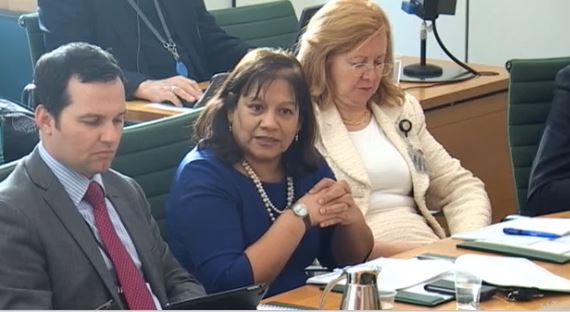 On 9 February 2016, the Science and Technology Committee held an oral evidence session on Satellites and Space. Below are the questions that I asked.

Valerie Vaz: You mentioned the European Space Agency. Are you surprised to hear that the director general thinks the UK Government are focusing too much on the commercial side rather than basic research—what he called the “full chain of innovation”? Where do you see that balance? Is that fair or unfair?

Andy Green: I am allowed to be outspoken. I am very proud he said that—really proud—because for some time the UK space industry and Government have been very smart about the way they operated with the European Space Agency. Having Tim Peake out there is a good thing. What it cost us compared with our compatriot countries was very small. We have concentrated on telecommunications, Earth observation and the things from which we believe economic benefit will come.I know that blue sky is good too, and we are pretty good at that in this country. We have universities that do a lot of great blue-sky innovation. When it comes to the European Space Agency, for me the slightly applied science view we have taken on it has been smart and a good thing to do.

Valerie Vaz: You do not think there should be a focus on both—that you could have both. I do not think you have quite answered my question. I asked whether you thought it was a fair criticism. When you talk about commercial applications, it usually starts with blue-sky research, doesn’t it, and then you see the practical implications? Do you think that criticism is fair, Dr Parker?

Dr Parker: From the perspective of the Space Agency, we are very consciously about joining up the full spectrum from basic science and innovation through to technology development and applications. The role of the agency is to be a leader across the whole picture. The agency is not attempting to do all of it by itself. That is why we have different delivery organisations, but I believe the overall picture—I am happy to talk to Johann Wörner about it—is a very coherent picture of getting the balance right. You will see that our investment in the European Space Agency has gone up over the past four or five years. Where it has gone up is in some of the commercially oriented activities, primarily telecoms, but we have also started to invest in the life and physical sciences programme of ESA—the science that is happening on the space station. Yes, there has been quite a big increase in investment in telecoms, but there is also a little bit of new investment in fundamental science. The work of fundamental research that goes on in universities that feeds through into innovation is completely vital, and that coherent picture is one that we hold rather close to us.

Valerie Vaz: There is a little bit of innovation. He is trying to say that there should be more, or an equal balance.

Valerie Vaz: You are now going to desert us and go off to see the Minister. When you plan your missions, are you putting a business case to him and the Government as a priority over anything else? Do you first have to make a business case?

Dr Parker: That is correct. Any new project, or set of programmes, is based on a business case that has to meet Treasury Green Book considerations, but the Space Agency at least is funded from the science ring fence, so that fully accepts the value of fundamental science, as well as stepping into the innovation and applications world. Yes, new programmes are based on business cases.

Valerie Vaz: But you look at the impact on British industry, don’t you, as the primary factor?

Dr Parker: It is one of the considerations, but it is also the impact on science, education, skills and even international policy, for example.

Valerie Vaz: I want to touch quickly on the funding part of it. You said you were part of the ring-fenced budget. Are you coming under UK Research? Will you be part of that? Sir Paul Nurse was confident that we would not be looking at just the commercial side but at blue-sky thinking, because that is really what scientists are about, aren’t they? I want to know where you fit into that scheme.

Dr Parker: The agency is an Executive agency of the Department, so it is not an arm’s length body in the same form as the research councils.

Valerie Vaz: You would not come under UK Research at all.

Dr Parker: I do not think any decisions have been made in that direction. I have not heard anything.

Stuart Martin: We receive our funding through Innovate UK, which is the UK’s innovation agency. There is discussion about moving Innovate into Research UK, as you know. That is another discussion. On the role we and Innovate play on the business side, one of the reasons why we have been successful in innovation over the past five or 10 years and have risen in worldwide rankings on the innovation scale is that we have that mix of business-led innovation pulling through research from the science base. If we tinker around with how we govern all of that, we must be careful that we do not lose the nugget of value we created that is so well recognised around the world.