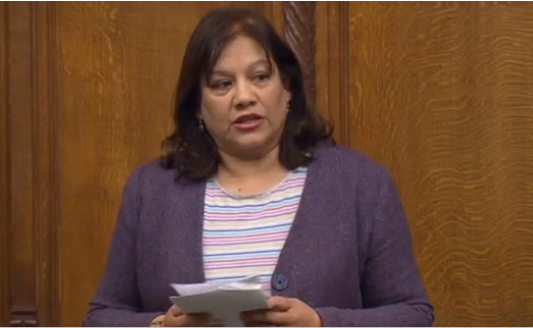 Valerie Vaz: “It is a pleasure to follow the right hon. Member for Basingstoke (Mrs Miller), and I congratulate everyone who is taking part in the debate. I apologise for squeezing a nine-minute speech into four minutes.

This debate takes place against the background of the recent murder of Berta Cáceres, a feminist activist who was shot in her home in western Honduras because of her defence of the rights of indigenous people. I hope that many women will continue her work. The Secretary-General of the United Nations has said that when he took office there were nine Parliaments in the world without women. That figure is now down to four, but that is four too many, and there has still been no female UN Secretary-General. Hon. Members are right to mention the percentage of women in this Parliament, which now stands at 29%. Her Majesty’s Opposition, the Labour party, has 43% female MPs, which is nearing equality.

However, the statistics are still damning. In law, one Supreme Court judge is a woman, and only 13% of QCs are women; in science, women make up only 14.4% of the science, technology, engineering and maths workforce in the UK; in business, only 5.5% of chief executive officers in FTSE 100 companies are women. What about the gender pay gap? In 2014, according to the Office for National Statistics, it was 14.2%, which means that in effect, women work from about 9 November to the end of the year without any pay.

I want to raise two issues about women in my constituency. Locally, there was an equal pay judgment in 2008, and the poor women who worked for Birmingham City Council are still waiting for a pay-out. The men who did the same sort of work picked up extra pay through routine overtime and other bonuses. Mary Ashby and Josephine Haynes are retired, and they have a right to their pay-out. The Government can find £375 billion for quantitative easing, so will they please find the money to make sure that all the women get their pay-out?

The second issue I want to raise is the closure of Her Majesty’s Revenue and Customs offices in Walsall South. Some 90% of the 60 jobs that will be lost are done by women. They have been offered jobs in Birmingham, but they have caring responsibilities, so they need to stay local. There is also the issue of higher travel costs. The Public and Commercial Services Union has worked out that when 50 jobs are lost, it costs a local economy £1.5 million. That is too much for Walsall to take. If the Government are serious about tax evasion and tax avoidance, they need local staff who have the institutional memory to help people with their tax affairs. The staff build up the skills over the years, which helps them to get promotion through the civil service.

On Saturday morning, more than 500 people in Walsall town centre signed a petition to ask the Minister to look again at this dislocation of women’s lives and stop the relocation to Birmingham.

Internationally, there may have been a fantastic victory in Burma for the National League for Democracy, but the Burmese army has used rape and sexual violence against women for decades as part of its warfare against ethnic minority groups in the country. Many victims were gang-raped and many were killed, and United Nation reports have described rape and sexual violence as “widespread and systematic”. The Burmese army accounts for 25% of the Burmese Parliament. We must keep up the pressure to get rid of the army from the Parliament in Burma.

In Delhi, there was an outcry following the gang rape, assault and murder of Jyoti Singh on a bus. Leslee Udwin’s film “India’s Daughter” showed the devastating impact of Jyoti’s murder. Who can forget the late Sue Lloyd-Roberts’ interview with the cleric from Gambia in which she challenged him about female genital mutilation, or the Nigerian girls who were kidnapped almost two years ago this April?

We need to do more than just have a hashtag, and that is where Governments come in. Almost every major piece of legislation that has improved the lives of working women has been introduced by a Labour Government: the Work and Families Act 2006, which extended the right to statutory maternity leave to a full year for all employed women, regardless of length of service; the introduction of paternity leave in 2003; and legislative protections for women and mothers under the Equal Pay Act 1970, the Sex Discrimination Act 1975 and the Equality Act 2010. Everybody knows how brilliant Sure Start centres are in helping local children, mothers and fathers in our communities. We need to save them.

Education is the key. As Gandhi said, if we educate mothers we educate society. Women cannot wait for the trickle-up to promotion—there needs to be positive action. Marin Alsop, who in 2013 was the first female conductor of the last night of the Proms, admitted to being “quite shocked that it can be 2013 and there can still be firsts for women”.

Let us hope that by this time next year, women’s place at the highest levels will be commonplace. We owe it to future generations.”