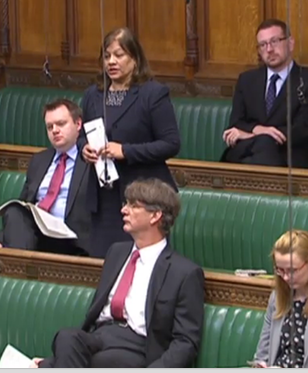 At Justice questions on Tuesday 26 April, I was called to ask the Minister a question.

Valerie Vaz: The Supreme Court has found that the Justice Secretary acted without moral authority and in a legal vacuum. Will he now ensure that there will be access to justice for those who do not meet the residence test?

Shailesh Vara : The Government are disappointed with the findings of the Supreme Court on the residence test, particularly when the last Government listened to Parliament and the public, and we made exceptions to that test. I am minded to say that there are millions of people across the country who take the view that it is right that there should be some sort of connection with Britain for people who seek to have their legal aid funds paid for by the British public.

I asked the question following the announcement that seven supreme court judges have ruled the residency test for civil legal aid unlawful.
The Minister’s reply did not explain why the Government are not applying a proper impact assessment on their policies. The Court ruled that the matter should have been debated by Parliament and not just applied.