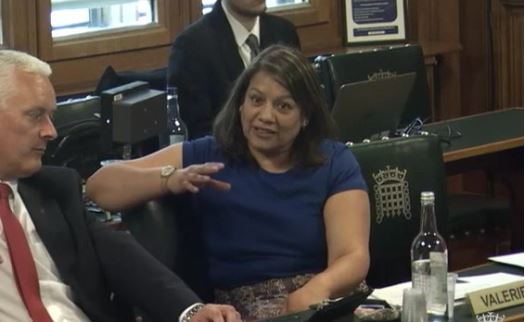 The session explores a number of themes, including: How well does the planning system minimise flood risk from new developments? What should developers do to reduce flooding and its impacts? How effectively are Sustainable Drainage System (SUDs) being used? How can new and existing homes be made more flood resistant?

Below is my exchange with the witnesses:

Valerie Vaz: Just to pick up on that, I suppose it is a question of the developers talking to the local authorities and leaving out the residents, as often takes place. Certainly I know many in my area where that has happened, and residents lose confidence in developers and local authorities. They can push things through against the views of the residents and against the views of the Environment Agency. Should there be more transparency in that case? In future, when a development is agreed with the local authority and it has gone through the committee, maybe against the wishes of the Environment Agency and against the wishes of residents, do you think residents should be told that that is the case?

Steve Wielebski: Again, taking Philip’s point, it is a matter for communication. Speaking from experience, I have encountered locally elected members who have been reluctant for developers to sit round the table and engage with local people. Personally, I think that is wrong, because local people have a lot to say in the development. Barratt’s would probably do what most of the major housebuilders do and have this desire to engage with local people so that they can feel as though they have been involved in shaping the environment in which they live. It is the right approach. There should be more of it. There is a reluctance sometimes.

Valerie Vaz: Did it whizz through because you had the consultation with the residents and there was no opposition?

Valerie Vaz: The second part of my point was still you have statutory agencies like the Environment Agency, and I would also include residents in this. If they are opposed to it, they can find you good reasons not to do it. When it goes on to their being opposed to what you are trying to do and it being whizzed through committee, do you think that that should be communicated to residents?

Steve Wielebski: We are very much of the opinion that it should be.

Valerie Vaz: You are building against advice.

Steve Wielebski: Potentially. They have a right to know what the decision-making process has produced.

Valerie Vaz: Why would you be building against advice?

Valerie Vaz: The Environment Agency has a completely different perception from you about contaminated land?

Steve Wielebski: They can do, yes. I have encountered that on a few occasions, particularly when it comes to groundwater and the impact on groundwater, but again we are not really here to talk about that. Yes, there is this necessity to inform people, but more often than not we tend to find that we have success when we engage with people.

Valerie Vaz: What if something is built against the advice of a statutory agency and in fact against the residents’ views? Committee reports come out; the resolution is approved. Should there be something else?

James Harris: It would be a case of looking at those cases where, for example, the Environment Agency advice was not taken into account. From the statistics I have seen, at least from the last one, which was 2012/13, only maybe 500 residential homes were permitted with a sustained objection from the Environment Agency in place. When you think about the tens of thousands of new homes that are coming through the system, it is a very small percentage. Perhaps again that would be an issue for the forthcoming Government review. I think Defra is carrying out a review of the Flood and Water Management Act in relation to planning and now the Government has committed to the SuDS review as well. I imagine they will remain as two separate review processes, but that will be a key issue to look at: to drill down into those occurrences. It is worth seeing what goes on to see if there is a problem or not.

Valerie Vaz: Could you let the Committee have the link to that report?

James Harris: There is more up to date data, but I just have not seen it yet. I can provide that figure.

Valerie Vaz: Mr Barnes, what is your view?

Philip Barnes: In Barratt we are not aware of any Barratt schemes that have been built where permission was granted against an EA recommendation that permission be refused. I think I read a statistic that of the units built in quarter one 2015, 99.8% were in accordance with EA advice. I suspect Barratt’s experience is not unusual. On residents being told, yes, there is nothing to be gained by trying not to be transparent with residents about the facts and figures of a development. Someone has to build houses. 80% of the schemes we build already have planning permission and sometimes we go on‑site and we are thinking, “Do you know what? I wish the engagement with residents before that planning permission was granted was a little better,” so we would be starting off from the front foot rather than maybe the back foot.

Valerie Vaz: Currently when you have planning permission approvals, you do not know who has voted for or against on the committee. Would you also be theoretically—you say Barratt are not included in it—in favour of some sort of additional resolution or a note or a proviso to say, “This was passed against the advice of statutory agencies and residents”?

Philip Barnes: I cannot see a problem with that.

Valerie Vaz: It is theoretical for you.