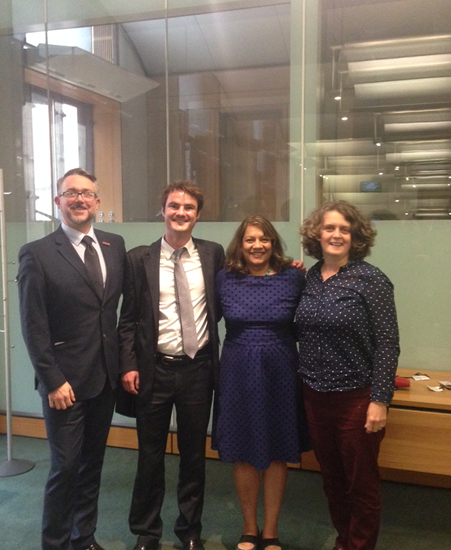 On Monday 13 June 2016 I chaired the All Party Parliamentary Group meeting on Epilepsy. The title of the meeting was Epilepsy in the workplace: Breaking down barriers.

I was pleased to welcome speakers Will Butterworth of Epilepsy Action (far left of the picture), Jamie Burton (middle) and Dawn Oliver of Young Epilepsy (far right), as well as experts on epilepsy, those who work in hospitals and charities across the UK, and those who’ve experienced epilepsy in their lives first hand.

Will Butterworth discussed Epilepsy Action’s survey which found out that only one in three people with epilepsy feels comfortable discussing their condition with their employer, with fear of discrimination being a major concern. Mr Butterworh also noted that employment figure of the UK public stands at 74%, this figure drops to 46% for those who are disabled and 28% for those with epilepsy. Jamie Burton courageously spoke about his own positive and negative experiences of dealing with epilepsy in the workplace. Dawn Butler briefed the APPG on Young Epilepsy’s frontline Transition Support Programme which is helping young people develop the confidence and skills they need to enter the workplace. The Transition Support Programme helps young people in numerous ways, from encouraging students to talk to their tutors to providing transport for young people to get to their exams.

At the meeting, the APPG published a Report on driving bans following seizures. I was alerted to this issue as Chair of the APPG on Epilepsy. Individuals from the USA can drive after a 6 months ban when they come to the UK, but a UK citizen would be banned from driving for 12 months following a seizure. I asked the House of Commons Library to undertake research on differing driving bans. The report is not a complete list of all the countries but a selection to provide an overview of how the periods of driving bans differ. Following this report, one of the ways forward is to raise this issue with the World Health Organisation and the International Bureau for Epilepsy. The aim would be to ensure that a singular policy would apply internationally making it simple, transparent, and equitable.

You can read the report here: APPG on Epilepsy Report on driving bans following seizures

The APPG paid tribute to Connor Sparrowhawk who tragically lost his life at the a from drowning in a bath tub a health trust facility. The health trust has accepted its failings that lead to Connor’s death. It was made clear at the meeting that people feel that more provisions need to be in place to safeguard young people with epilepsy.

The secretariat is provided by Young Epilepsy.