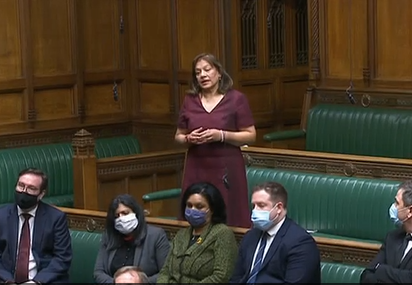 On Sunday, the Secretary of State for Culture, Media and Sport Nadine Dorries MP announced on Twitter that the funding model which has allowed the BBC to serve our country for one hundred years is going to be abolished. The Secretary of State should have announced a change in policy to the House first.  Monday 17 January 2022 I asked a question to the Secretary of State during her statement to the Commons on the BBC’s future. It was also announced that the licence fee which funds the BBC would be frozen for the next two years and rise in line with inflation for the following four years, requiring immediate cuts to the BBC’s budget.

I said: “Let’s talk about value for money. Will the SoS agree with me that 43 pence a day is value for money, for BBC iPlayer, BBC Sounds, BBC World Service?”

The Secretary of State answered: “It’s billions of pounds, and I don’t believe that if you asked any family who was receiving repeated letters or a bailiff knocking on the door, or a request to appear at a Magistrate’s Court, would think that it’s value for money because it’s money they can’t afford. The issues that working families, and those that are hard pressed in the situation that we have with rising inflationary pressures, think it is difficult to pay £159 a year out of their income, which is why we’re freezing that money for the next two years, and not allowing it to rise.”

The Secretary of State’s argument that the Government is taking this action because of the rising cost of living makes little sense when the same Government have raised National Insurance, cut Universal Credit, and rejected Labour’s plans to reduce energy bills. The BBC is a treasured institution that provides a fantastic service for people in Britain and around the world. I could have gone on to mention BBC Bitesize, keeping the nation informed and entertained throughout the pandemic, and Radio 1-4 not to mention all the BBC channels and any number of other services – for 43pence which is less than the pen the Secretary of State was holding in her hand. !!!