I was delighted to attend the third British Bangladeshi Business Awards at The Bingley Hall in Birmingham on Thursday 9 October 2019. The Awards are organised by Desh Foundation UK which is celebrating its 10th anniversary. Desh Foundation UK was founded by Mishbaur Rahman in 2009 as a small local community-based organisation to encourage business development within the Bangladeshi community in the UK.

At the same time, the High Commissioner for Bangladesh Saida Muna Tasneem was hosting a trade delegation in London; it was good to see that these two events were happening in parallel. It was a pleasure to meet Bangladesh’s Minister of Industries, Nurul Majid Mahmud Humayun MP, at the Awards.

I paid tribute to local people that were in attendance. I was pleased to see the Mayor, Councillor Paul Bott, and Councillor Christine Bott. We have many successful business-people in Walsall including Iman Ahmed from Urban Link, Nahid Ahmed and Misbahur Rahman who has recently graduated from the Bernie Grant School of Political Leadership. There are many successful people in Walsall and this will continue for many generations. The first generation has worked very hard and made a lot of sacrifices and now the next generation is establishing itself. They are making their marks in a wide variety of fields including catering, finance, law, politics, media, NRB investments, community projects and innovation. Around 90% of Indian restaurants in Britain are owned and run by Bangladeshis. In politics, three Labour members of the community were re-elected as MPs in 2017: Rushnara Ali MP, Tulip Siddiq MP and Rupa Huq MP.

In 1990, the 44% of the population in Bangladesh lived in poverty, this has now dropped to 15%. There is more to do and we in this country will continue to work with Bangladesh.  It is important to work together, and we cannot forget what happened at Rana Plaza where over 1000 people died and approximately 2,500 were injured. This made people across the world aware of the working conditions of people in Bangladesh and the conditions have now changed for the better.

Climate change is a global phenomenon and Bangladesh is one the most vulnerable nations to the impacts of climate change. The climate emergency needs to be taken seriously. I was one of the signatories to the historic motion in Parliament which declared a climate emergency.

I presented the prominent business leader of the year award to Zillur Hussain (pictured above) and the Innovation Award to Abdul Niaz Muhaimen (below). 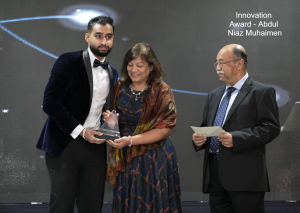 Kamila Rahman was awarded the best entrepreneur award (female). Kamila was a young mother at University and became the first in her class to open a solicitors practice in 2014 – ‘Cambridge Solicitors’ in Birmingham. In 2015, Kamila opened a second branch in Swansea. ‘Cambridge Solicitors’ now has more than 2000 clients and around 15 staff members. Kamila is also the founder of a Youth Mentoring Scheme which supports young aspiring women to achieve their goals in educations and business.

Muhammed Kuduse was awarded the best entrepreneur award (male). In 2009, Muhammed started ‘Mad Mobiles’ with three employees and achieved a turnover of £400,000 in its first year. He successfully opened another 14 stores in the space of 6 years and in 2015 the company turned over £3.5 million. Muhammed has gone on to establish other successful ventures including ‘Go Phone Ltd’, ‘Dremspas Limited’ and ‘Luxury Kitchen and Bath Ltd’.

The UK and Bangladesh will work together in the future, particularly in the next two years. We will be celebrating the anniversary of the founding of the nation by Bangabandhu Sheikh Mujibur Rahman, whose daughter is now Prime Minister in Bangladesh. It is important to note that many remittances are sent back to Bangladesh which shows the connection between the two countries. Even though people may make their mark here in the UK, they do not forget any difficulties that people face in Bangladesh.

My thanks to the Bangladeshi Community for the support they give to elected representatives as we carry out our work. Thanks also to Desh Foundation UK and to everyone who worked behind the scene to make the Awards a success.

For more information about Desh Foundation UK, you can visit its website here.