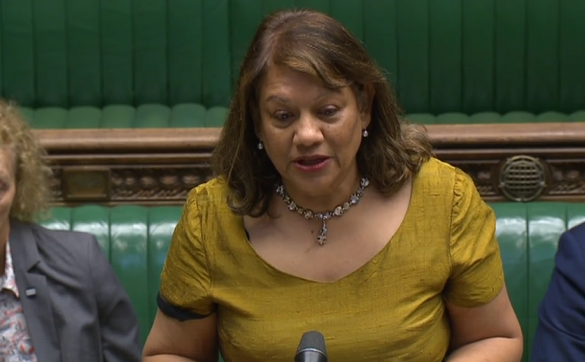 What chaos: a future Prime Minister refusing to support his own ambassador in the face of verbal abuse. It is disgraceful that there was a malicious leak of emails. Sir Kim Darroch was doing his job. The Secretary of State for International Trade vowed to apologise to the President’s daughter, an unelected representative. What on earth is he doing meeting the President’s daughter, and why is he apologising to her and not to Sir Kim Darroch?

I thank the Leader of the House for giving us the business for next week. I note that the Government have found time for the debate on the Gemma White, QC, report and the amendment to the independent complaints and grievance procedure. The report came out at 10 am today. I have not had an opportunity to look at it in detail, but Labour Members wish to thank Gemma White, QC, for the time and effort she has put into her report. We will look seriously at the detail of the recommendations and work on a cross-party basis to make Parliament a modern workplace, and I encourage all Members to undertake the Valuing Everyone training, as it is a very good training session.

Just two weeks are left until this House rises for the summer recess, but we still do not have the conference recess dates. Can the Leader of the House give us any advance on returning on 3 September? Will he give an undertaking that when a new Cabinet is formed, on 24 July, a new list of ministerial responsibilities will be published as soon as possible? The last one was published in December 2018.

I am sure the Leader of the House would like to correct the record: last week, when I raised the Conservative candidates’ spending spree, which totals £100 billion—these are uncosted policy changes—he claimed that the Labour Opposition are spending “£1 trillion”. As a former Financial Secretary, he can do better than just pulling figures out of thin air. He will know that Labour’s 2017 manifesto was the only one that was costed. I would be happy to arrange a meeting for him with the shadow Chancellor to go through all the costings.

What chaos: a future Prime Minister refusing to support his own ambassador in the face of verbal abuse. It is disgraceful that there was a malicious leak of emails. Sir Kim Darroch was doing his job. The Secretary of State for International Trade vowed to apologise to the President’s daughter, an unelected representative. What on earth is he doing meeting the President’s daughter, and why is he apologising to her and not to Sir Kim Darroch? Was this an official visit, when he met the President’s daughter, and was Sir Kim excluded from that meeting? Was the abuse of our ambassador about removing an obstacle because they would rather negotiate in a golden lift away from those who serve our country and want the best for our country? As the head of the diplomatic service has said, we stand in solidarity with Sir Kim Darroch.

On Monday, the Leader of the House said that he would “take on board” my request to find time for a debate on the message from the House of Lords on setting up a Joint Select Committee, and that he would give it “further thought.” Does he have any further thoughts? We are happy to debate it on an Opposition day, if he will give us one. I do not think that it is for the Opposition to go to the Backbench Business Committee to request time for a Backbench Business debate.

The Leader of the House will know that the Bank of England estimates that a worst-case Brexit will involve border delays and markets losing confidence in Britain, which could shock the economy into a 5% contraction within a year—nearly as much as during the global financial crisis. Simon Coveney, Ireland’s Deputy Prime Minister and Foreign Minister, raised the “ugly prospect” of customs checks and political instability in Northern Ireland in a no-deal situation, which he said would “put many businesses and many people under a great deal of strain”.

Philip Rycroft, the former permanent secretary at the Department for Exiting the European Union, said this week that “everybody should be worried about what happens in a no-deal situation. We would be taking a step into the unknown.” Mr Rycroft said that leaving with no deal would be “fraught with difficulty”.

The economy is going backwards: we have now had a third quarter of falling productivity, which decreased by 0.2%, and manufacturing has hit a six-month low. Deutsche Bank is sending people home with boxes; the last time we saw that was in the global financial crisis of 2008. Before the Leader of the House says anything, let me remind him that it was not Labour brothers who did that; Lehman Brothers was responsible. The right hon. Member for Uxbridge and South Ruislip (Boris Johnson) has repeatedly refused to rule out no deal, so I ask again: please will the Leader of the House give us time to debate the Lords message?

Will the Government explicitly rule out proroguing Parliament to force a no-deal Brexit? The Opposition stand with Sir John Major, who said that he would seek a judicial review in the courts if the new Prime Minister tried to suspend Parliament to deliver a no-deal Brexit. The former Attorney General, the right hon. and learned Member for Beaconsfield (Mr Grieve), said that, were that to happen, it would be “the end of parliamentary democracy”.

Yesterday, United Nations experts voiced their “deep concern” over Iran’s “consistent pattern” of denying life-saving medical treatment to detainees, and the UN said that the continued detention of Nazanin Zaghari-Ratcliffe is a mockery of justice. Will the Leader of the House update the House on what steps the Government have taken this week to free Nazanin?

Finally, the UK Parliament newsletter reminds us that on 11 July 1859, Big Ben rang out for the first time. We wish to hear him or her again.