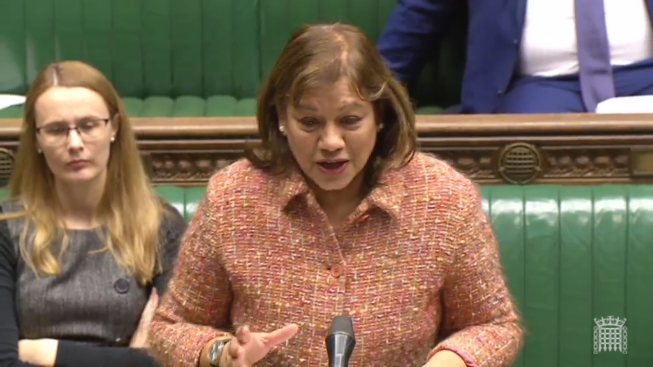 Parliament returned after the Christmas Recess and I was at the Despatch Box at Business Questions where I raised various issues with the Leader of the House, Rt Hon David Lidington MP. My Speech is below:

I thank the Leader of the House for the forthcoming business, although I am concerned that it appears we are not going to rise for the summer recess. We still do not have a date. I warn everyone to be prepared to work through the summer. I wish Members and staff a very happy new year. We are going to need all the wisdom and strength we can get for the task ahead.

Following on from your remarks, Mr Speaker, hon. Members have raised with me the issue of extending the time for Foreign and Commonwealth Office questions. Never before has the reasonable voice of Britain been so needed in international affairs. Questions could just be extended by an hour. We have excellent diplomats with institutional memory who can make a big difference in the world.

May I draw the attention of the Leader of the House to two reports from the Procedure Committee that may have got lost in the Christmas revelry? The press release for the report published on 18 October had the headline: “Procedure Committee rails ‘against handouts and talked out’ Private Member’s Bill”. Sadly, there was a further incident on Friday 16 December, in relation to a private Member’s Bill introduced by the hon. Member for Banff and Buchan (Dr Whiteford), when one speech took one hour and 17 minutes. The vote, with 133 Ayes to 2 Noes, showed the will of the House to be clearly in favour of the Bill. It cannot be right, therefore, that Members who wanted to speak in favour of the Bill could not do so.

One of the report’s recommendations is that you, Mr Speaker, invoke Standing Order 47, which would put a time limit on the consideration of private Members’ Bills. Since I have been in the House, this Standing Order has been used in every single debate apart from on Fridays. In a letter to the Clerk of the House, the Chair of the Procedure Committee, the hon. Member for Broxbourne (Mr Walker), indicates that this change may need a resolution of the House. A further report of the Procedure Committee, on 14 December 2016, recommended the use of Welsh at Westminster in the Welsh Grand Committee. This was suggested by my hon. Friend the Member for Clwyd South (Susan Elan Jones), who indicated to me that it is cheaper to do that here. The Official Reporters say there would be no problem with that. Rather than eat into Back-Bench time, could those two resolutions be taken together in Government time?

Returning to Brexit, a report before Christmas from the other place, “Brexit: financial services”, confirmed that London was ranked as the leading financial services sector in the world and called for a transition period to protect jobs. Page 3, paragraph 2, in the summary of a report by the Environmental Audit Committee, states:

“The Prime Minister has indicated that the UK is likely to leave the single European market and the Customs Union.”

I had not understood that to be settled Government policy. That is why we need these proper debates. The EAC calls for a new environmental protection Act while negotiations are ongoing and a list of zombie legislation—legislation transposed into British law but not updated. It is possible that the confusion has arisen because the Departments have proliferated like amoebae. It cannot be right that, according to figures from the House of Commons Library in December 2016, the Department for Exiting the European Union has only 300 staff, while the Department for International Trade has 2,709 staff. DExEU is getting £94 million a year, while £26 million is going to the Foreign and Commonwealth Office and DIT, but DIT has taken staff from the FCO. We need clarity.

We, Her Majesty’s Opposition, have a proposal. In view of the judgement about to be handed down by the Supreme Court on the triggering of article 50 at the end of March, the Leader of the House should consider a review of what each Department does, because the British public will never forgive this Government if they see people dying on trolleys while vanity Departments are set up to keep hon. Members inside the tent rather than outside it. The task before us is enormous, but we need to remember the reasons we joined the EU and why there was a vote to leave. That way, all views can be respected and we can negotiate from a position that protects jobs, workers’ rights, the environment and our security. We need to do what is best for the UK, not base our approach on the rhetoric of the campaign and a clueless Government.