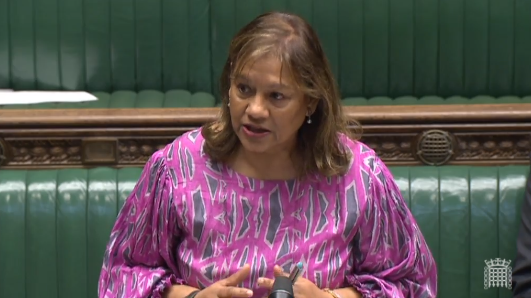 As Shadow Leader of the House, I raised a number of questions at the first Business Questions following the Conference Recess. My speech is below:

I thank the Leader of the House for announcing the forthcoming business. Did the she really announce the Second Reading of a Bill that had its First Reading and was published yesterday? I have looked at the Bill, and it is riddled with delegated powers to Ministers. Is this an acceptable way for the Government to behave—with no scrutiny? In addition, the Leader of the House has announced only one week’s business, whereas her predecessor used to announce the business for two weeks. Are the Government in such chaos that they do not even know what is happening from one week to the next?

Mr Speaker, this is a fiasco. I think we are running out of words. There is a new lexicon for constitutional outrage—I will have to consult my thesaurus. This is terrible. It is actually quite a serious matter, because it is a contempt of the democratic process. I am trying to make light of it, to see whether we can get some movement, but we cannot.

I note there was no reference in the Leader of the House’s statement to a debate on restoration and renewal. Whereas we all want the works to be done, Members on both sides of the House will be keen to see the Government’s motion, particularly as, in response to a written question tabled in the other place, Lord Young of Cookham said that a motion and debate was likely “in the autumn”, although he failed to say which year. Can the Leader of the House confirm that that will be autumn 2017?

Will the Leader of the House ensure that the list of ministerial responsibilities is updated? The Prime Minister confirmed ministerial appointments on 20 June 2017, and I do not know whether there is any reason—we are waiting for an announcement—why the new list cannot be published. Members need to know which Minister to write to. The last list was published in December 2016.

I want to clarify a question that was raised on Tuesday. An hon. Member asked, “Where does it say in ‘Erskine May’ that the Government have to vote?” Well, chapter 21 of “Erskine May” deals with debates. At the conclusion of a speech of a Member moving a motion, the Question is always proposed by you, Mr Speaker, or the Chair, and voices are called when the Question is put on every motion. The Government are either for or against a policy, and if they abstain, they have to tell the House—and the country—exactly what their position is on that policy. The hon. Member for Wellingborough (Mr Bone) made a pertinent point in Tuesday’s debate when, as a true parliamentarian, he said that the Government could actually make a statement on what that policy was within a reasonable time, so they would not have needed to have do so before the conference recess.

The Prime Minister yesterday referred to the Labour party conference, but she failed to mention that when she spoke at conference, there were cries of ,“F off!” Actually, that was people saying that the letter “F” had fallen off the back of the platform. Her Majesty’s Labour party had no problem with our F’s—ours was “For the many, not the few.” Maybe our message has more stick-ability.

In yesterday’s Prime Minister’s questions yesterday, the Prime Minister failed to answer when the Leader of the Opposition asked whether she agreed with the former Prime Minister, John Major, when he said that universal credit is

Croydon Council, which piloted the roll-out, has said that it wants a pause. Mayor Burnham has said that homelessness will increase. The National Housing Federation has expressed its concerns. Members on both sides of the House and the Work and Pensions Committee have called for a Christmas truce. Will the Leader of the House ensure that the Secretary of State for Work and Pensions actually comes to the House on next week’s Opposition day with a position? People are being pushed into rent arrears and poverty.

The Government are always saying that the NHS is not being privatised, so will the Leader of the House please say why Public Health England is reviewing whether free travel vaccinations for diphtheria, tetanus, cholera, typhoid and hepatitis A should be stopped? Does she agree that they should remain free? Their removal could pose a huge risk to the community. May we have a statement to say that those vaccinations should remain free?

It is National Libraries Week, and I would like the Chancellor’s autumn Budget to provide local authorities with enough money so that South Walsall, Pheasey and Pleck libraries in my constituency can be reopened. Our children are losing out.

Yesterday was World Mental Health Day, and I will be presenting on your behalf, Mr Speaker, a Speaker’s School Council Award in the 17-to-19 category to Queen Mary’s Grammar School in my constituency for its “change your mind” project. The aim of the scheme is to increase awareness and discussion of potential mental health issues, particularly for those in years 6 and 7 who are making the transition to senior school, and that message has already been taken out to six primary schools.

Sunday is the last day for the old £1 coin, and David Pearce, a pupil at Queen Mary’s, was the winner of the contest to design the new coin. The winner was chosen by George Osborne, who in a nice move actually telephoned David to tell him. I am sure that the House will join me in wishing headteacher Tim Swain, the teachers, the parents and, of course, the pupils for their continued success and commitment to public service.