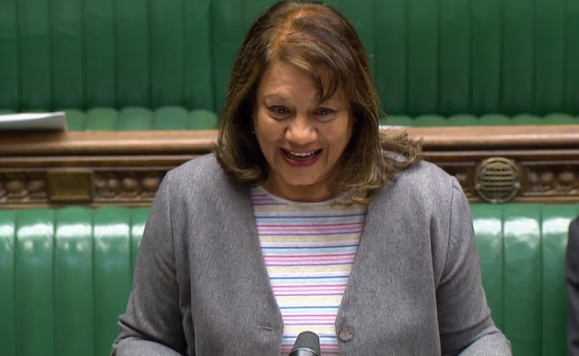 At least three candidates have said that the UK will leave the EU without a deal, even though Parliament has expressly voted against it. This week, the National Farmers Union organised an event at which farmers in the West Midlands spoke of the terrible uncertainty of a no-deal exit. I asked for a debate on the effect of no deal on the food and farming industry.

I thank the Leader of the House for the forthcoming business. My copy of the statement is on two pages; I wonder whether the second page is intentionally blank—we seem to have only one week’s business.

I thank everyone, including the Clerks, who is involved in the new edition—the 25th—of “Erskine May”, which is also available online, so lots of people will be able to look it up and hold the Government to account for what they do in the Chamber.

From the business next week, it looks as though the Backbench Business Committee has taken control of the business. Will the Leader of the House consider giving us an Opposition day? It seems that the Government have gone into the cupboard—it is a bit like “Old Mother Hubbard went to the cupboard”. I keep thinking of nursery rhymes, what with the 10 green bottles standing on a wall in the leadership election.

The Government have gone to the cupboard, and lurking in there is the Non-Domestic Rating (Lists) Bill, which was published only yesterday but has its Second Reading on Monday.

I know that last week was the Leader of the House’s first week, but he said that he would come forward with the dates for recess “in due course.” Parliament and the country have no idea what is going to happen after July and in September and October. The Leader of the House must have had some discussions; will he provide a bit more clarity on when he will announce the dates for the summer and conference recesses? This issue cannot be part of the campaign promises. The Leader of the House is Parliament’s voice in Government. Parliament is not irrelevant, particularly at this time, when we have a minority Government.

One of the many governmental powers that can be exercised without statutory authority, by convention, is the Dissolution of Parliament, or Prorogation if it is the end of the Session. The sovereign acts on the advice of her Ministers. We know that the breaching of conventions is not illegal, and we are talking about a convention, but the courts can look at it. It is outrageous, morally and constitutionally, for candidates in the Tory leadership election to suggest that they will put our gracious sovereign in a position to prorogue Parliament. Will the Leader of the House rule that out today?

At least three candidates have said that the UK will leave the EU without a deal, even though Parliament has expressly voted against it. Will the Leader of the House rule that out today? He must have seen the Cabinet note warning that the country is still unprepared for leaving on 31 October. It said that we need four to five months—that is at least until November—for trader readiness, and six to eight months to ensure that adequate arrangements are in place to build stockpiles of medicines. Should we not have a debate on whether the country is actually ready for leaving on 31 October?

The candidates are saying that they will renegotiate the withdrawal agreement. Are negotiations still ongoing? Is there anyone talking to the EU? May we have a statement on the current discussions with the EU? Instead, we are getting a string of policy announcements, none of which is costed, none of which has been put to the electorate, and none of which has been agreed by the Chancellor. Handouts to the highest earners, according to the Resolution Foundation, would see 83% of gains going to the richest 10% of households, with the biggest beneficiaries, as a proportion of their income, being those on £80,000. The shadow Chancellor has said that the money involved is more than we spend every year on justice or children’s social care. I am pleased that the Leader of the House mentioned Grenfell, but not a single one of the candidates has said what they will do to prevent another Grenfell.

This week, the National Farmers Union organised an event at which farmers in the west midlands spoke of the terrible uncertainty of a no-deal exit and of how they need to use places such as the Netherlands to grow spinach, particularly in October when our growing season is coming to an end. Can we have debate on the effect of no deal on the food and farming industry?

In Carers Week, in Tory Britain, there are around 7 million carers in the UK, 58% of whom are women. Hon. Members will have seen the display of the Multiple Sclerosis Society in the Upper Waiting Hall. One in three people with MS are not getting the care that they need. When will the Government publish the social care Green Paper?

The Leader of the House will have heard the words of the outgoing ambassador in Singapore, who said that people outside the UK have described the UK as beset by division, obsessed with ideology, and careless of the truth. All the major investment is going to Germany and France, but, worryingly, this is what we are hearing: £350 million to the NHS, free television licences for the over-75s, trade deals are easy, no deal is better than a bad deal, and strong and stable. You cannot run a country on rhetoric. The Government may have won the vote yesterday, but we will try again for the good of the country and for our reputation in the world.