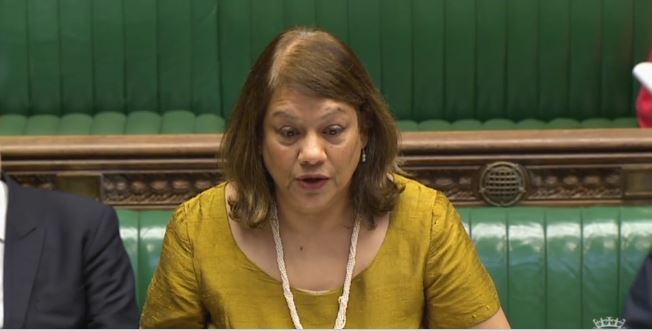 I thank the Leader of the House for giving us the business for next week. Can he confirm or deny rumours that the Queen’s Speech will be on 17 May?

I would like to wish everyone a very happy St Patrick’s day for tomorrow. I do not know whether you know, Mr Speaker, but it traditionally marks an interruption to Lenten fasting. Perhaps the Leader of the House or even the Chief Whip will say, “Salt and vinegar crisps all round” just to cheer up the troops.

This has been a week of delay, incompetence and confusion. The big six energy companies have raised their prices and consumers have been overpaying. In response to a question from my hon. Friend the Member for Hartlepool (Mr Wright), in which he stated that E.ON raised its prices by 14% and SSE by 8%, the Minister said:

“It has been reported by Ofgem that there is no reason to increase prices…The time is up for these companies.”

What does the Minister do? Instead of acting, he publishes a Green Paper. The Government must take a leaf out of the 2015 Labour manifesto and step in to put a cap on prices now—no more delay. In contrast with the obsession about how someone eats a bacon sandwich, it was a popular and costed policy. May we have a debate on what powers the Government will use to protect consumers immediately?

Speaking of manifestos, it is because the Government got away with it before—they said no top-down reorganisation of the NHS but they did it; they said in coalition no increase in tuition fees but they did it—that they thought they could do it again. There is a real piece of work to be done on national insurance contributions. Bizarrely, the Government instigated the Taylor review, which is due in June, having already put the policy through. They should have given businesses the time to plan for the increase. It is very hard for small businesses to find extra money suddenly. Instead of coming to the Chamber, the Prime Minister took to the podium in Brussels to announce that the policy had been deferred. The Chancellor came to the Chamber on Wednesday. The Chancellor seems to have fallen down his own black hole—tell that to Stephen Hawking.

What of the confusion and chaos that is Brexit? As more and more Select Committee reports are published, may we have a timetable of when and how they will be debated? The Government seem to be fixated on an unamended Bill going through Parliament, rather than preparing the country for what is to follow. The Foreign Affairs Committee report on the implications of no deal said that the Government refused to give evidence, saying it would be nothing more than an exercise in guesswork. However, the Committee’s report stated:

“The consequences of such a failure are far from ‘an exercise in guesswork’. They are, in scope if not in detail, largely predictable—and, in…evidence…have been predicted.”

The report recommended that each Department should

Will the Leader of the House tell us whether that will happen, and whether those plans will be reported to the House? Pages 97 and 98 of the report “Brexit: trade in goods”, published by the other place, remind us that

“The EU is, by a significant margin, the UK’s biggest trading partner… Many UK businesses cannot easily substitute their imports from the EU with UK products.”

What help will businesses be given to secure those new suppliers—or are the Government abandoning small businesses?

Let me now raise the issue of the west midlands leaflet. Apparently, a leaflet produced by another candidate for the post of west midlands mayor—a member of the same party—suggested that Siôn Simon did not have any experience. In fact, Siôn Simon is a former Member of Parliament, a former Minister and a Member of the European Parliament, so he is quite experienced enough to take the West Midlands forward after Brexit.

Women are not just for International Women’s Day, but for life. We are currently celebrating women’s history month as we continue to tell “herstory”. On 21 March, in the Commonwealth Parliamentary Association Room, there will be a lecture on Constance Markievicz, who was the first woman to be elected to Parliament but did not take her seat. International Anti-discrimination Day falls on the same date. Will the Leader of the House find time for a debate on “Race in the workplace: The McGregor-Smith Review”? Staff at the Equality and Human Rights Commission are being sacked, but it is that organisation that should be implementing the recommendations of the report, which states:

“If BME talent is fully utilised, the economy could receive a £24 billion boost.”

That would fill the £2 billion hole in the Budget.

Not only is it good for the economy to use all the talents, but using all the talents is the right thing to do for the common good, in a good society.