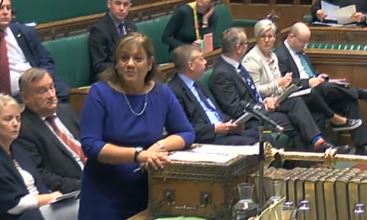 During Business Questions I raised the eviction notices sent out following the roll-out of universal credit 38 days before Christmas – this is from a heartless Government whose policies are hurting the most vulnerable in society.
Here is my speech at Business Questions this week:
I thank the Leader of the House for the forthcoming business. I note that next Tuesday we have day three of our consideration of the European Union (Withdrawal) Bill
That is day three of eight. We are talking about clause 5 and schedule 1. Can the Leader of the House confirm that the deadline for new clauses and amendments is 5.30 pm today? I have asked her previously about proper notice being given for Members, in the interests of our democracy, so will she ensure that she gives Members proper notice of consideration of Bills and ensure that this does not happen again? Can she say whether the Committee of the whole House will be completed before Christmas recess, which begins on 21 December? Will the Bill be in the other place before the Christmas recess? My friends in the other place are keen to help out.
Will the Leader of the House ensure that the List of Ministers’ Interests is updated, as it was last updated in December 2016? This is vital not just for Ministers, but for Members, because some of them, such as the right hon. Member for Wokingham (John Redwood), may have another position. It seems that in an article, in his other job as an investment manager, he said it is:
“Time to look further afield as UK economy hits the brakes”.
Will the Leader of the House therefore say whether it is Government policy for Government Members, in their other jobs, to advocate not investing in the country?
It is difficult to understand how the Government cannot know the size of the divorce bill. Surely the Chancellor will have to know this amount of money, because he has to set his Budget. This just smacks of more fiscally incompetent government. The way the Government dealt with the Paradise papers, including in the response they gave to my right hon. Friend the Member for Barking (Dame Margaret Hodge) earlier this week, was appalling. We have had the Panama papers and the Paradise papers, and now we have the invisible papers—the so-called “impact assessments” on the 58 sectors; first, they exist and then they do not exist, and then they exist in a form that is incomprehensible to everyone apart from Ministers. The deadline for providing these to the Committee is next week, because the Under-Secretary of State for Exiting the European Union, the hon. Member for Wycombe (Mr Baker) said he needed “three weeks” from the time the motion was passed by this House. He said there was a mixture of “qualitative and quantitative analysis”, but I am sure the Chair of the Select Committee, my right hon. Friend the Member for Leeds Central (Hilary Benn) is perfectly capable of analysing those papers. As the motion was very clear, will the Leader of the House give a commitment that the invisible papers will be available and say when they will be delivered, given that the motion was passed by this House?
The invisible papers are rapidly leading to an invisible Cabinet. Some may have missed it but there seems to be a new game in town: “’I’m a Cabinet Minister get me out of here!” The week before last one left the Government and last week another did so, and another comes before a Select Committee and makes a mistake on Government policy, putting a young family at risk. This is a heartless Government—[Interruption.] Listen to the evidence: 38 days before Christmas eviction notices are being sent out following a policy that is flawed and cruel, denying people a chance to manage their life; if the Government think universal credit does not have an effect, will the Leader of the House say why a major housing association has stated that the arrears rate for those claiming the new benefit is about three times higher than that for other tenants? That is the evidence, and that evidence calls for a pause in the roll-out of universal credit.
I note that there is to be a debate on tuition fees in Westminster Hall next week, but we would like the Minister for Universities, Science, Research and Innovation to come to the House to make a statement and explain why the chief executive of the Student Loans Company has been sacked. Given that his Department is a major shareholder, with 85%, will the Leader of the House ensure that the Minister comes here, particularly as some students have overpaid their loan by £10,000 and the budget is £100 million? [Interruption.] It is in the papers today—it is in The Times.
Finally, I come to House matters. Will the Leader of the House say what day and time has been allocated for the debate on the restoration and renewal programme? She has previously talked about December, but given the Budget debate and the European Union (Withdrawal) Bill, we do not have many days left before the Christmas recess. I, too, wish to remind everybody that they have three days left of #Parliamentweek2017. This was kicked off brilliantly by the ninth sitting of the Youth Parliament, and we have you to thank, Mr Speaker, for allowing it to sit here. Its Members are fantastic, treating this House with such respect and listening to the arguments on both sides. We can learn lots of lessons from them. On your behalf, I thank all the staff and volunteers who co-ordinated the whole day. Their topics for the year ahead were “Votes at 16” and “A curriculum to prepare us for life”. As the Leader of the House said, Parliament’s education service has ensured that 4,000 events are taking place throughout the country, with more than 900 primary schools and more than 300 secondary schools taking part. I thank them all for their efforts in educating the next generation on democracy.