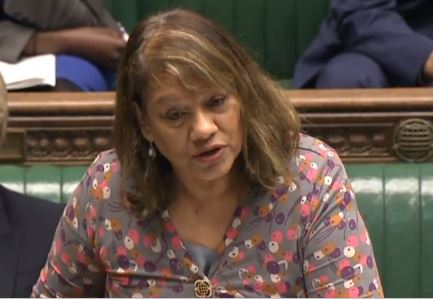 At Business Questions I raised the following questions with the Leader of the House:

I thank the Leader of the House for the forthcoming business—again, it is just for one week, not two—and also join her in wishing everybody peace and prosperity for Diwali. I also thank her for providing an advance copy, which I got via email on Tuesday, and the Vote Office in Portcullis for having hard copies of it for Members on Monday.

This week, the sky darkened, a hurricane hit our islands, and the Government continued with their game playing both here and in Europe. I want to reiterate what you said after the motion yesterday, Mr Speaker, which was that

“the Leader of the House has to be the House’s representative in the Government.”

I am sure that the Deputy Leader of the House, who was in his place yesterday, will have informed the Leader of the House about the outcome. There were seven points of order following the debate. Member after Member—and you, Mr Speaker—wanted to know what the position is when the House votes 299-0. As the shadow Secretary of State for Work and Pensions said in her point of order, if the Government have retreated on certain aspects of a policy, the Minister should come to the House and explain.

This is where we make the law. The hon. Member for Gainsborough (Sir Edward Leigh) was right to say that this is not a school debating chamber. You made it very clear, Mr Speaker, that the Government should come to the House, because a motion was passed to pause the roll-out of universal credit. It took a week for them to end the charges on the helpline for universal credit. This is a disorganised Government who are disrespectful to the House. What do we say to the democracies around the world; to the UK Youth Parliament, who are coming here on 10 November; to young people as they learn about democracy; or to those who voted to get their sovereignty back? No wonder the EU negotiating team think the Government are amateurs. That is why they want to speak to the Opposition.

Could the Leader of the House please tell us how the Government will honour the result, as the Official Report put it:

Is that really it for the business for next week: Monday, robot cars and Tuesday, smart meters? Are those the most pressing things for the House to debate? The shadow Secretary of State for Transport told me that the Government have accepted our amendments, so it is effectively our Bill.

The country is crying out for action—not calls for evidence—on housing, education, health, and the mounting debt caused by stagnant wages and increases in the cost of living, which we want to address in our Opposition days. But the Leader of the House must give the House a commitment today that non-urgent statements will not in future be used to disrupt Opposition days. I know the Government did not want to hear about people in rent arrears struggling to feed their families when they are in work, but that is the reality when Government policy is failing.

Mr Speaker, I want to draw your attention to another alarming situation. The Sanctions and Anti-Money Laundering Bill—a very serious Bill, to make provisions enabling sanctions to be imposed to comply with UN obligations “or other international obligations”: the EU cannot be mentioned at all on the face of the Bill—had its First Reading in the House of Lords yesterday, but the Bill will be printed today. That must be a first—where a Bill has passed its First Reading and no one has seen its contents until a day later. It should be one for the Foreign Secretary, but perhaps he cannot be trusted with the Bill. Worse still, the House of Commons cannot be trusted with the Bill. So will the Leader of the House please explain why that Bill started in the other place?

When will the European Union (Withdrawal) Bill come before the House for its Committee of the whole House stage? I read in an email yesterday that it will be after the November recess. Is that correct? Should we not be discussing it here? Will the Leader of the House please tell us what is happening?

May we have a statement on the growing scandal of the missing NHS files, as revealed in the Public Accounts Committee? There has been no response to the letter from my hon. Friend the Member for Stockton South (Dr Williams) on referrals for children with autism; 142 Members across the parties want to know why parents and children in a place like Stockton have waited nearly four years from the point of referral to specialist assessment. NICE guidelines say it takes three months. We are failing those children, some of whom are absolutely brilliant and see life in a different way from us.

Finally, it was great to attend the Women of the Year lunch last Monday with other hon. Members. The winners of the awards are truly deserving. The leadership award went to Dany Cotton, the first female commissioner of the London fire brigade, for her leadership in response to the Grenfell Tower fire. The international award went to the White Helmets, as a favoured charity of our dear colleague Jo Cox. It says:

“To save one life is to save all humanity”.

The main award went to the women of the emergency and medical services following the Manchester bombing—doctors, nurses, paramedics, the deputy chief constable and community police officers. I know the whole House will join me in acknowledging the work that those women have done in difficult times, as we all work towards a more equal society.