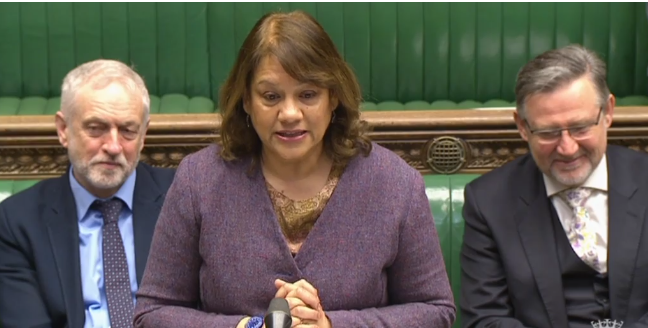 At Business Questions I paid tribute to the Father of the House, Sir Gerald Kaufman, before I raised various issues with the Leader of the House, Rt Hon David Lidington MP. My speech is below:

I thank the Leader of the House for giving us the business.

With your permission, Mr Speaker, I would like to spend some time talking about and paying tribute to one of our great parliamentarians and the Father of the House, Sir Gerald Kaufman, who died at the weekend, following your brilliant tribute on Monday. His family described it as the end of an era; it is for us here in Parliament, too.

As the Leader of the House said, Sir Gerald’s great loves were ice cream and films. Apparently he went to see “Singin’ in the Rain” 20 times in all the cinemas in Leeds when it first came out. He worked on “That Was the Week That Was”, the forerunner of “Saturday Night Live”, with the great broadcaster Alasdair Milne, the future director-general of the BBC. He was fearless in his support for justice internationally and for his constituents. His majority at the last election was 24,000, and that was down to his popularity and his care for his constituents. Today—World Book Day—he is remembered for his iconic book “How to be a Minister”. Before I came into this place—before I met Sir Gerald—I bought that book as a present for my right hon. Friend the Member for Leicester East (Keith Vaz) when he first became a Minister in the Blair Government. Many hon. Members here, as well as former Members who are now in the other place, have told me how they used that book as their bible.

We have some lovely anecdotes. The Clerk of the House reminded me that on your re-election, Mr Speaker, Sir Gerald was quite keen to get the whole process right, and he proceeded with avuncular dignity. I remember the day; it went off absolutely beautifully and you were re-elected. He loved marmalade, so on a Select Committee trip to the Isle of Mull, to cheer him up on his birthday—it was one of the big numbers—he was made orange marmalade ice cream. On a Committee visit to Rome, some Members had not been there before, so before he went to the ambassador’s dinner, he took them to the Trevi fountain and, of course, to have some gelato. Another Member told me that when Sir Gerald was a Minister, he always gave a lift to Back Benchers in his ministerial car because he knew that one day he would be a Back Bencher. We talk about the greasy pole of politics. I think it is more like the luge, actually—you just get battered as you go down.

Sir Gerald dressed beautifully—I always used to watch him in the Tea Room—and that was probably a tribute to his father, who was a tailor. He was a close friend of Harold Wilson, another great Labour Prime Minister. He was loyal, clever and courageous, and he will be missed from this place. We send our condolences to his family and friends.

I thank the Leader of the House for providing the dates of the summer recess. Everyone is rejoicing because we now know we will rise on 20 July. I wonder whether he could give us an indication of when the state opening of Parliament will be. I know that the Deputy Leader of the House is keen to get his outfit ready, perhaps in keeping with the tribute to Sir Gerald.

I know that the Leader of the House has been busy tabling motions. One, in particular, will be considered on Tuesday 7 March. It relates to Standing Order No. 83. Many lawyers like amendments that read “Substitute ‘the’ for ‘and’”, but I might have to explain the motion to other people, so I wonder whether the Leader of the House could publish an explanatory memorandum and tell us why this is being hurried through on the day before the Budget? I know that the motion relates to things that are happening in Scotland.

The Leader of the House is keen on visiting the other place, so he will be interested to know—I do not know whether he has caught this on the news—that their lordships intend to send back the EU Bill with an amendment, which they won by 358 votes to 256. Will the Leader of the House give us some indication of when the Bill is likely to come back to this House? Will it be in the week commencing 13 March or the week commencing 20 March?

On a point that the Leader of the House made last week, I remind him that, as has been pointed out in a cross-party Select Committee report, the Government’s claim that the NHS will receive an additional £10 billion by 2021 does not accurately reflect

“the impact of the Spending Review on health expenditure…If the spending review period is considered—2015–16 to 2020–21—that increase is £4.5 billion”,

not £10 billion. I would be grateful if the Leader of the House cited the alternative figure.

I thank the Leader of the House for providing me with the closing date for the consultation on the new funding formula, which is 22 March. I appreciate that he has also written to me. The Prime Minister yesterday said that we “have had free schools”, as though they are in the past, but that they continued to create more good places. She said no to grammar schools, but was that a no to free schools? The overall funding of new places through free schools is set at £7.9 billion out of a total of £14.9 billion for new places. Will the Leader of the House comment on the latest National Audit Office report, which found that some free schools opened in areas where there were already plenty of places, thus creating spare capacity that could affect the future financial sustainability of other schools in the area? May we have a statement on whether funding for free schools represents good value for money for the taxpayer, and whether it will fix the problem of school places?

I am trying to rush through my points because I am aware that other hon. Members want to make contributions on Sir Gerald’s life. Given that we will have a debate on International Women’s Day after these proceedings, I want to raise two cases of women who have been arrested and placed in a detention centre. Irene Clennell was married to a British husband for 27 years, and her children and grandchild were born here. She has been removed without warning. A 20-year-old student, Shiromini Satkunarajah, who is about to finish her degree, has also been placed in a detention centre with no warning. Will the Government clarify the policy on the deportation of women who are no threat and who have been caught unfairly by these arbitrary decisions?

It is now 10 years since the Corston report on women in prison. Women who enter prison are more likely to be there for non-violent offences. Last year, 12 women killed themselves in prison in England and Wales, and there were 22 deaths of women in prison. The noble Baroness Corston has called for more Government funding for women’s centres. I know from sitting on the Criminal Justice and Courts Public Bill Committee that the Government had committed funding for secure colleges, but they U-turned on that decision. If that money is there and committed, will the Leader of the House have discussions with the noble Baroness about using it to protect existing women’s centres and create a more sustainable model?

Lastly, I welcome the two new Members: the hon. Member for Copeland (Trudy Harrison), who is the 456th woman in this place, and my hon. Friend the Member for Stoke-on-Trent Central (Gareth Snell). It is good to have another Labour Member from the west midlands. I hope that both hon. Members will be inspired by the life and work of Sir Gerald Kaufman, a great parliamentarian. May he rest in peace.