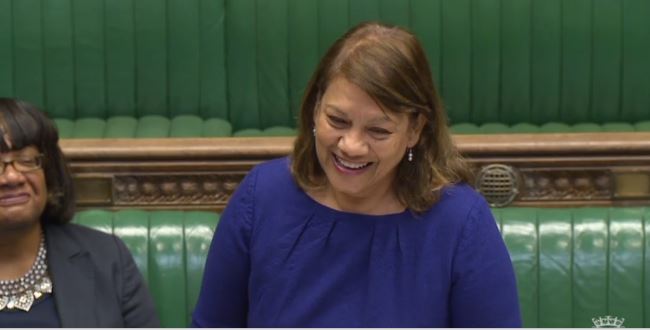 I thank the Leader of the House for giving us the business for the very last week of this short and eventful Parliament; I will save my further thanks for the end of my response. This was an eventful Parliament, not least because of the death of PC Keith Palmer, Leslie Rhodes, Aysha Frade, Kurt Cochran and now Andreea Cristea, as well as the injury of many others. As the dean of Southwark cathedral said at the memorial service for PC Keith Palmer, they died in the shadow of the clock that counts the minutes, the hours and the years of our lives. And, of course, our beloved colleague Jo Cox should have been fighting this election. We need to remember them as we campaign, during the election, for a country that is tolerant and just.

The Prime Minister wants stability and to strengthen her hand in the negotiations, but blames the opposition parties for calling a general election. This is about her dithering and confusion, and watching her back. First, what an arrogant alleged statement it is that she should presume to know the outcome of an election. Secondly, what have her Government been doing for the last nine months? Thirdly, can the Leader of the House confirm that if the Government win, we will not enter into a rolling programme of snap elections during the negotiations?

The Prime Minister wanted to trigger article 50 without a vote, but the courts said that we live under the rule of law and that Parliament should have a say—this is a democracy, not a dictatorship—and there has been silence from the Government since July 2016. Her Majesty’s Opposition called for a White Paper on the Government’s plans for Brexit in October 2016, but there was silence until a speech in Lancaster House, not this House. Mr Speaker, I do not know what the matter with the Government is; they seem to be afraid of you and of making statements in the House. I find you very personable—except when you say “Order, order.” Only later did the Government set out their 12 points of principle. Finally, a White Paper was published in February. Her Majesty’s Opposition insisted on a final vote on the deal and forced the Government to agree, because we are a representative democracy. As the Prime Minister sat in front of the great portrait of Robert Walpole to sign the letter to Donald Tusk, President of the European Council, she forgot to mention Gibraltar, one of our overseas territories, where 96% of people voted to remain—no wonder she forgot to mention them.

The Government therefore appear to be speaking for the 52 %, while Her Majesty’s Opposition will balance the views of the 52% and the 48% and speak for the country. The confusion lies within the Prime Minister’s party, not within the Opposition. Of course the Government want a general election, because they need a new manifesto. Every day the Government break a manifesto pledge. There was no mention of lifting the cap on grammar schools in the 2015 manifesto; that became Government policy, and it is now stalled by opposition from all sides of the House. An increase in national insurance contributions for self-employed workers was ruled out of the manifesto, but then became Government policy, and then there was a U-turn. The manifesto said nothing about doing no harm to the vulnerable, yet their cars are being taken away as they wait for their personal independence payment assessments; many hon. Members have written on behalf of their constituents to stop the vulnerable losing their only mode of transport before they can appeal the decision.

This is a dithering, confused Government who cannot make a decision for the good of the country, so may we have a final debate next week on what leadership and stability really look like? We on this side of the House say it looks like this: for children, it is protecting Sure Start and free school meals for all primary school children; for students, no increase in tuition fees; for working people, a £10 minimum wage that will lift them out of poverty, not the living wage of £7.50; for society, investment in our public services, with local authority grants that are based on the need to protect local services, such as police forces and libraries, not special deals for special friends; ensuring small businesses thrive by preventing late payments; supporting those who care for others by an increase in carer’s allowance; and for senior citizens, protecting pensions and compensating women affected by an increase in the state pension age. Policies for the seven stages of life—that is what this country needs. No dithering, no confusion, just clear vision and strong leadership. Her Majesty’s Opposition, in government, will work for a tolerant, fair and dynamic United Kingdom.

I should like to echo the Leader of the House in thanking all the House staff for their brilliant support. I should like to thank you, Mr Speaker, and your office, and the Leader of the House, his erstwhile deputy and his office for all their help. I also thank my office and everyone who has made my job easier, including my Chief Whip, who tells me to cut out the jokes. Tomorrow will be Her Majesty the Queen’s 91st birthday. She shares her birthday with my hon. Friend the Member for Gateshead (Ian Mearns), for whom it will be a significant day. I hope he will not mind my saying that it will be his 60th.

Oh, it is the right hon. Lady’s birthday as well! I will not say what her age is. [Interruption.] She is 21, as are we all. I echo the Leader of the House’s thanks to those Members who are standing down. They have given their lives to public service, and we thank them all. Finally, I should like to say that it has been an absolute privilege to be the shadow Leader of the House.