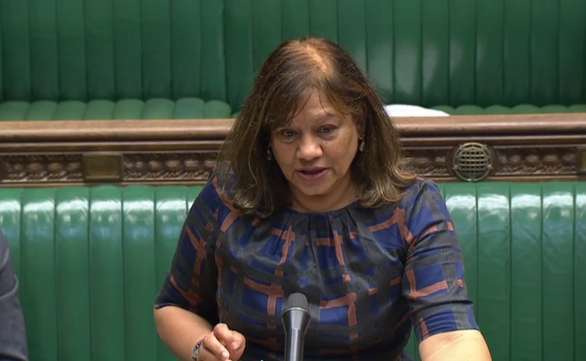 It is Children’s Hospice Week this week. Hospices across the country are under threat, including one in my constituency, Acorns. It employs 70 people to care for 233 Black Country children and their families. It is facing closure due to lack of Government funding.

I am asking him when the identity of the new Prime Minister will be confirmed. I understand that all the results will be out on 22 July; perhaps he could let us know. I am pleased to learn that the House will sit in September, and I am sure that the Leader of the House will announce the conference recess dates as well. I think it is only fair to the outgoing Prime Minister that she knows when her last Question Time will be, and, more important, only fair to us—to Parliament.

The Leader of the House will know that we have had a busy week. He will also know that on Tuesday we had a Back-Bench debate about the Cox report. When is he likely to table a motion for a debate in Government time? It may be necessary to change a Standing Order, so will he find a date as a matter of urgency, before the House rises on 25 July?

I know that Back-Bench debates are important, but there is a backlog of very important legislation. The Financial Services (Implementation of Legislation) Bill, the Immigration and Social Security Co-ordination (EU Withdrawal) Bill, the Agriculture Bill and the Fisheries Bill need Report stages, and the Trade Bill is again stuck in the other place. When are we likely to debate those Bills?

Ministers are so occupied with their bids to become the next Prime Minister. Only after dropping out of the Conservative leadership race did the Health Secretary order a root-and-branch review of NHS food. Parts of the country have been unsettled by torrential rain, homes have been left without power and roads have been flooded in Lincolnshire—people in Wainfleet are in tears—but there has been no statement from the Secretary of State for Environment, Food and Rural Affairs. I know that there have been questions to him, but there has been no specific statement about the people in Wainfleet. The Home Secretary has said that he will put 20,000 more police officers on the beat if he is elected leader, but the Government have cut the number already. He is merely repeating a commitment made by Her Majesty’s Opposition.

As for the right hon. Member for Uxbridge and South Ruislip (Boris Johnson), he has been careless with his words. He has said that his comments about Nazanin Zaghari-Ratcliffe had made “no difference”, but they were used at her trial. He has put a woman’s life at risk and separated a family. For the record, Nazanin was on holiday visiting her parents. She has been in jail for three years. I met Richard Ratcliffe yesterday, and other Members have visited him too. Will the Leader of the House raise Nazanin’s case with both the former and the current Foreign Secretary, and send the Iranian Government the message that they should show the international community their seriousness, and free Nazanin and reunite the family now?

A motion scheduled for next Tuesday is to approve a statutory instrument relating to the draft Climate Change Act 2008 (2050 Target Amendment) Order 2019. The motion is a step in the right direction, but why are we waiting until 2050? Heathrow is already the largest single source of carbon emissions in the UK. Plans published on Tuesday revealed that Heathrow airport will construct a third runway by 2026 and complete its 50% expansion by 2050. This includes diverting rivers, moving roads and rerouting the M25 through a tunnel under the new runway. The Government’s own figures show that nearly 1 million households are to face increased daytime noise from allowing a further 700 flights a day. May we have a statement on the new plans for the expansion of Heathrow airport, including the environmental impacts?

It is Children’s Hospice Week this week. Hospices across the country are under threat, including one in my constituency, Acorns. It employs 70 people to care for 233 Black Country children and their families. It is facing closure due to lack of Government funding. I met my constituent Mark Lyttle, a bereaved parent, who spoke about his daughter Isabella, who was cared for by Acorns. Mark said Acorns Walsall extended and improved her quality of life and provides the family with ongoing bereavement help, because, sadly, Isabella passed away earlier this year at the age of 11. Black Country MPs across parties are working to save this hospice, and it is the only one of the three in the area to close.

I know that the Secretary of State for Health and Social Care should be accountable. We have heard the phrase “A bedpan dropping and we hear it Whitehall,” but so much for accountability: at this stage we have to write to the Health Secretary and the head of NHS England, and the Prime Minister said yesterday that they would match-fund what the clinical commissioning groups put forward. May we use the good offices of the Leader of the House to raise this with the Health Secretary? We need the Health Secretary to make the decision so that children’s hospices, particularly Acorns, have their long-term funding. We cannot crowdfund and fundraise to save a children’s hospice.

The third anniversary of Jo Cox’s murder was on 16 June. The hon. Member for Banbury (Victoria Prentis) is working very hard on one of Kim Leadbeater’s key asks for all of us: to focus on the humanitarian emergency in Syria, one of the issues that mattered most to Jo, by highlighting the plight of civilians trapped under the merciless bombing in Idlib.

It has been a busy week for me and the Leader of the House. Yesterday we agreed that we would save the education centre. It is also Refugee Week, and the education and engagement service will be providing a workshop to the refugee and migrant centre in Walsall, “An introduction to your UK Parliament”. I am pleased that that is going ahead and that education is also to be part of any restoration and renewal.

Finally, I offer my commiserations to the Scottish football team but wish the Lionesses well in the next stage of the World cup.