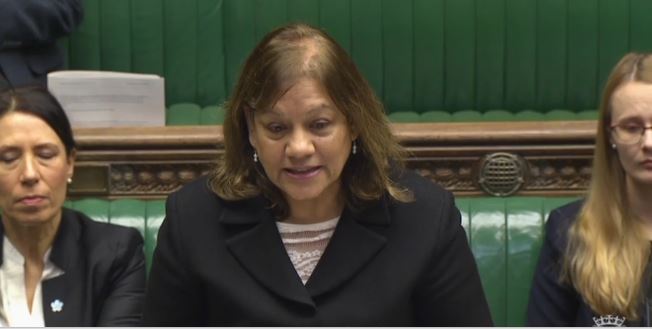 At Business Questions I paid tribute to PC Keith Palmer, the police, the security service and emergency services, before I raised various issues with the Leader of the House, Rt Hon David Lidington MP. My speech is below:

I thank the Leader of the House for giving us the forthcoming business and for mentioning where staff who work in the House can get extra support if they need it. I should also like to thank him and his deputy for the leadership they showed yesterday. This is a sad day, because we have lost a superhero who has kept us safe every day. His family are suffering, and they are trying to make sense of his death. Their lives will be utterly changed, but we will always remember Keith Palmer.​

I also want to thank colleagues, who were extremely patient yesterday, as well as the year 12 politics students from Dr Challoner’s High School, who were up in the Gallery, and the pupils from a primary school in Birmingham. I especially want to thank the police, the security service and the emergency services for all they did to protect us and keep us informed in their usual professional manner and for the dedication that they show as public servants, day after day, allowing us to go about our lives safely. I also thank the Serjeant at Arms and the magnificent team of Doorkeepers. We all know how good they are every day, but on behalf of us all, I want to offer them an extra-special thank you for their calm professionalism and kindness in dealing with the situation yesterday. It is a real tribute to the House service. The Clerk of the House and his team also ensured that decisions could be made promptly and sensibly.

The Prime Minister said that this is business as usual, so I will proceed with business as usual and ask the Leader of the House a question. The convention is that there is a debate when a statutory instrument is prayed against, so may I express my concern that that convention has not been followed in the case of early-day motion 985 on personal independence payment regulations and early-day motion 948 on tuition fees and awards?

Under those regulations, those in psychological distress are denied access to additional support. Epilepsy Action is deeply concerned about the regulations and how they affect people with epilepsy or other long-term conditions. For students, the inflation-linked rise represents a 2.8% increase, and if that continues, fees could rise above £10,000 in the next few years. The House rose early on Tuesday, and the last Opposition day was a month ago. The Government seem to be thwarting the Opposition, preventing effective opposition by controlling the business in that way, so may we have time for a debate on those two important statutory instruments?

Article 50 is triggered next week, and there will be a vast amount of legislation to enact, so will the Leader of the House ensure that White Papers, draft legislation and an impact assessment are made available before the Bills are published? Will he ensure that the Government use secondary legalisation not to stifle debate, but to allow Parliament to scrutinise that secondary legislation?

May we have a debate about leaving the BBC alone? Back Benchers may have time on their hands, but they said in a letter sent round by many hon. Members that the BBC is focusing on regretful voters, which is absurd. I have had emails from people who voted to leave and have regretted it, but the letter contains not a single piece of evidence—it was all opinion. After all, the Opposition have had to put up with the fact that the new editor of the “Today” programme used to openly support the Tory candidates for Mayor of London and the fact that the current editor of the Evening Standard is a former Tory Chancellor. More importantly, there should be no intimidation of or pre-emptive strike on a public broadcaster.​
Another manifesto promise has been broken. While the consultation on the new funding formula closed yesterday, the Government promised in their 2015 manifesto a real-terms increase in the schools budget during this Parliament and that

“As the number of pupils increases, so will the amount of money in our schools.”

However, nearly half of schools would face a funding cut. In Walsall South, schools face a reduction of £490 per pupil. May we have a debate on the impact of the new funding formula to set out the losers and the losers, because every school will be a loser? Schools will bear the brunt of unfunded rises in pay, pension and national insurance contributions that could amount to between 6% and 11% of their budgets by 2019-20.

This is the last business questions for the Leader of the House and me before the Easter recess, so I again want to thank the Clerk of the House, his staff, the Library, the Doorkeepers, and you, your Deputies and your office, Mr Speaker—everyone who has made my work as shadow Leader of the House easier. I wish everyone a happy Easter. Finally, I want to say, from every corner of this United Kingdom and every corner of the world, blessed are the peacemakers.