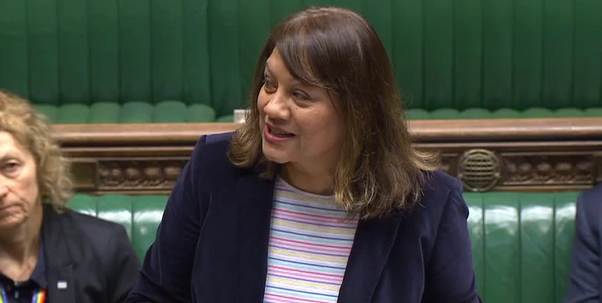 At Business Questions I raised that the Prime Minister did not say in her statement whether her deal would be brought back to Parliament. I asked the Leader of the House whether it is the Government’s intention to bring back a second meaningful vote to the House?

I thank the Leader of the House for the business for next week. I note that there is no Opposition day debate, but I am pleased that she mentioned proxy voting. Mr Speaker, I think you and the Leader of the Opposition have signed the certificate to ensure that proxy voting can take place as soon as possible, and I hope that leaders of the other parties will also sign those certificates as soon as possible.

Can the Leader of the House confirm that the House will rise on 14 February and return on the 24th? I ask that because the Foreign Affairs Committee has actually cancelled a visit to India during that time, and I understand that builders working on restoration and renewal have been told that they will not be able to carry out their planned programme of work. Could we also have the May recess dates?

Can the Leader of the House confirm that Parliament will not be prorogued? There are some noises off to suggest that that might happen. I know that the former Secretary of State for Exiting the European Union has got a new job; we know that he has access to heavy machinery, but I hope that is not what the Prime Minister meant by chaos and threats to “social cohesion”.

In her statement on Monday, the Prime Minister did not say whether her deal would be brought back to Parliament, but the Prime Minister’s spokesperson made it clear that the vote that is due to be held on 29 January is not the second meaningful vote. Is it the Government’s intention to bring back a second meaningful vote to the House? I do not know when the Leader of the House intends to lay the business motion for the debate next Tuesday, but will she ensure that it will be a full day’s debate in protected time? Also, when will the votes be expected?

We need to pass an approval resolution and the EU withdrawal agreement Bill, which obviously has not yet been introduced, before 29 March. The Leader of the House might not be able to tell us today, but will she come back next week to say whether that will be scheduled before 29 March, which it needs to be?

Last week, I raised the issue of the size of statutory instruments. My hon. Friend the Member for Workington (Sue Hayman) and other MPs co-signed a letter to the Chief Whip, because their constituencies will be affected by an SI tabled to replace the REACH regulation—I will set this out because it is important—on the registration, evaluation, authorisation and restriction of chemicals. Right hon. and hon. Members have met industry representatives, who have serious concerns about the legislation and the effects that it might have on the chemical industry. Those industries are staying in the UK, so it is important for all Members to have a chance to debate that. Will the Leader of the House ensure that that statutory instrument is brought to the Floor of House for debate and proper scrutiny?

Many hon. Members have been to see the Prime Minister. The Chair of the Exiting the European Union Committee said—yes, I am going to say it again—that the Prime Minister’s door was open but her mind was closed. However, did anyone check whether she was wearing headphones? Perhaps she was listening to the Everly Brothers, “Problems”, or Chumbawamba, “Tubthumping”. As it is Neil Diamond’s birthday today, perhaps she was listening to “Everybody’s talkin’ at me”, or all the greatest hits of MP4.

I was going to describe the situation as chaotic, but I suppose confused and reckless are better words. The Secretary of State for International Trade admitted that preparations for a no-deal Brexit, by falling back on World Trade Organisation rules, are impossible unless the Trade Bill passes through Parliament. I heard the very able Minister, the hon. Member for Meon Valley (George Hollingbery), say just now that the House of Lords has blocked the Bill: it has not. The Lords found that the Trade Bill gives wide powers to Ministers, does not include Parliament or the devolved Administrations, and has no process for making international trade agreements. When will the Government publish the White Paper to set out their policy and proposals for making such agreements?

That is chaos and confusion on the EU, but there is also some domestic confusion. The Prime Minister said that employment in the west midlands has gone up but, in fact, unemployment has gone up. The west midlands is the only region to show a fall in employment. It is important to get statistics and facts right in the House.

Will the Leader of the House clarify policy, because the Government have been saying different things? Parliament passed the Sanctions and Anti-Money Laundering Act 2018 with an amendment on public registers. The Act said that such registers would be introduced by 2020 if the overseas territories had not done so voluntarily, and yet a Minister has said that the Government will have “a requirement for an operational public register by 2023”. That is three years later than the House agreed and five years after Parliament voted to take action on the issue. Will she clarify that?

What are the Government doing about leveraged debts? The Bank of England has raised a red flag over that new breed of sub-prime loans. Ten years on from the financial crash, banks are doling out those risky loans to indebted companies. May we have an urgent statement from the Chancellor on leveraged debts before it is too late? Our much admired and efficient justice system is in meltdown, causing the Attorney General to say that the Crown Prosecution Service cannot take any more cuts.

I join the Leader of the House in celebrating—if that is the correct word—or remembering Holocaust Memorial Day. We think of all the survivors and remember that the EU was born from that—people wanted peace. Let us remembers the resilience of the survivors, who have lived without hate throughout their lives.

I, too, of course will celebrate Burns night tomorrow. I thought that alcohol was banned on the premises, but still I am happy to have a dram of whisky. Last year, there was delicious haggis in the Terrace café. It is on the menu tomorrow, and I encourage all hon. Members to have a go. I hope that our talented chefs will also give us a vegan option.