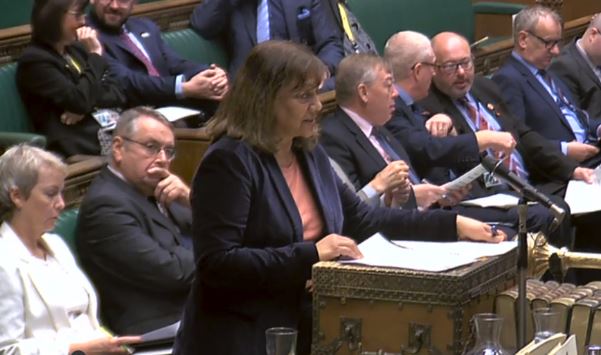 On the EU, I asked the Leader of the House to clarify either at Business Questions or in a letter to me—and the House—what has actually been agreed in the negotiations? In her statement on Monday, the Prime Minister said that “95% of the withdrawal agreement and its protocols are now settled.” The EU’s chief negotiator Michel Barnier said that 90% was resolved. Which is it?

I thank the Leader of the House for the business—although it is still only for a week and two days. At last week’s business questions the Leader of the House said I was complaining when I asked for the dates of the Easter recess, but I am going to try again as she has not announced them, and I do not think that is a very nice way of describing what I asked for—I was just doing my job. Maybe unconsciously the right hon. Lady is irritated by my questions, but this is business questions not business discussions. Members, staff and the House need the dates in order to plan ahead.

I note that there has been no rescheduling of time for the Offensive Weapons Bill. It is a very important Bill: it covers the sale and delivery of corrosive substances, possession of dangerous knives, possession of offensive weapons. My hon. Friend the Member for Lewisham, Deptford (Vicky Foxcroft) and other hon. Members have consistently asked the Government for action on this to protect the public. The last time the Bill was scheduled to be discussed the Government put on three statements, and the next time there were two urgent questions and then a statement by the Prime Minister statement. When will we have the Report stage and Third Reading?

The right hon. Lady mentioned race relations and the anniversary of the passing of the Race Relations Act 1965—by a Labour Government. A point of order was raised yesterday by the hon. Member for Glasgow South (Stewart Malcolm McDonald). He said a person was welcomed for lunch on the parliamentary estate; at rallies this person’s supporters have been pictured performing Nazi salutes. Will the Leader of the House join me in opposing far-right extremists being invited on to the parliamentary estate? Does the Leader of the House know if he read the behaviour code?

Also last week I asked about the statutory instrument on managing migration on to universal credit, saying it should be taken on the Floor of the House. I have asked for this twice, and the right hon. Lady has not given me a yes or no answer. Can she just say, “Yes it will”? We know how to pray against it; we just need a confirmation and reassurance from her that we can debate it on the Floor of the House.

Again last week I asked about Northamptonshire County Council-owned NEA Properties. The Leader of the House again did not answer the question and say what happened to £1.5 million of public money spent on unspecified projects. Will she ask the Secretary of State for Housing, Communities and Local Government to update the House?

The Government seem to be profligate with public money and state assets, because apparently the UK equity firm Cerberus misled the Government in the biggest sale of state assets in UK history. The company told the Government it was planning to offer homeowners better mortgage deals before its £13 billion purchase of former Northern Rock mortgages. It has not provided any new mortgages and 65,000 homeowners are still trapped on high interest rates. May we have a statement on the sale of the loan book from UK Asset Resolution, which was set up by the Treasury?

On the EU, can the Leader of the House clarify either now or in a letter to me—and the House—what has actually been agreed in the negotiations? In her statement on Monday, the Prime Minister said that “95% of the withdrawal agreement and its protocols are now settled.”

The EU’s chief negotiator Michel Barnier said that 90% was resolved. Which is it? The Prime Minister said that the Irish border was still a “considerable sticking point”, and the European Parliament Brexit negotiator Guy Verhofstadt agrees, as he said yesterday that “progress is at 0%” until the Irish border issue is solved. The EU offered to convene a special summit in November to help the Prime Minister, but it seems that that has now been withdrawn and that the special summit will now be in December. Do the Government have any idea when Parliament can express its view on the terms of the deal? We also heard from the almost millions of people who took to the streets of London last week to give us their view.

Will the Leader of the House say whether the Finance Bill vote will be in November? Will it be before the vote on the final deal, or after? We need to know because the Procedure Committee has to respond to the letter of the shadow Secretary of State for Exiting the European Union, my right hon. and learned Friend the Member for Holborn and St Pancras (Keir Starmer), of 23 October in which he asked that the business motion allow for multiple amendments to be tabled, selected and voted on before the main motion. This is a sovereign Parliament, not a supine Parliament.

While the Government’s negotiating strategy is in chaos, what are they saying to Sir Paul Nurse and other Nobel prizewinners about the effect on science of our leaving the EU? What are they saying to the CBI, 80% of whose members say that uncertainty has had a great impact on their investment decisions? What are the Government doing following the freedom of information request that revealed that most NHS trusts have made no preparations for Brexit, despite worries about the effect on staffing and the availability of drugs? We could have a statement on this, but better still, could the Government update the sectoral analysis on how much money they are going to give to each sector?

I, too, want to join the Prime Minister and the Leader of the Opposition in sending my good wishes to Sir Jeremy Heywood. He has spent 35 years in the civil service as Cabinet Secretary, permanent secretary to two Prime Ministers at No. 10 and, among other jobs, principal private secretary to two Chancellors. His first job in the civil service was as an economic adviser to the Health and Safety Executive. We wish him all the best; we have lost a tremendous amount of institutional knowledge.