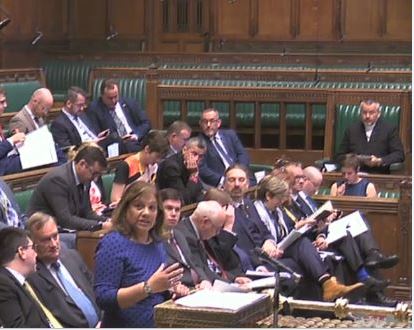 I thank the Leader of the House for the business. I am not sure that she is aware that although she has allocated a debate on the Gibb report on Tuesday, there is a Westminster Hall debate on Wednesday at 9.30 am on the same report. I do not know whether that is a typo or whether she just wants to punish the Back Benchers.

I send the condolences of Her Majesty’s Opposition to all Scottish National party Members on the death of Gordon Wilson, who was their leader from 1979 to 1990 and was the Member of Parliament for Dundee, East from 1974 to 1987. We send our condolences to his family and friends.

It was a great get-together in the Chamber on Saturday, as Jo’s family and friends gathered together to unveil that beautiful plaque. I thank you, Mr Speaker, and your office for making it such a memorable day and all Members from both sides who turned up. I also thank my hon. Friend the Member for Wirral South (Alison McGovern), who organised the plaque. You were at Prime Minister’s Question Time yesterday, Mr Speaker, and Brendan was right when he said that it was noisier during PMQs than when there are children in the Chamber.

I am grateful to the Parliamentary Digital Service, who worked over the weekend to stave off the cyber-attack. Will the Leader of the House allow time for a debate on restoration and renewal and will the Gibb report be debated on two separate days? Will she allocate the Tuesday to the Opposition?

“to direct criticism of the government’s policy and administration and to outline alternative policies.”

It is this Government who are unpatriotic and have caused uncertainty.

Let us remember that the previous Prime Minister resigned and walked away, that the current Prime Minister wanted a bigger majority and now has a minority Government, and that that minority Government are pulling in separate directions. First, a Minister says that the cap on public sector pay may be lifted, then No.10 refutes that. The Chancellor has to leave the country to set out his position because it is opposite to the positions of the Secretary of State for Exiting the European Union and the Foreign Secretary. We on this side have an alternative: we will take the country’s result and turn it into a new relationship with the EU, in a new model that puts the economy, jobs, peace, security and opportunity for our citizens at its core.

Two High Court judgments have overturned Government policy. The High Court has ruled that the benefit cap was unlawful; Mr Justice Collins said that it was causing “extreme hardship”. Some 20,000 children and many single parents have been hardest hit by this heartless policy. Irrespective of whether the Government will appeal, may we have an urgent debate on the judgment? When will the Government report back on the Cridland review of the state pension age?

The Government’s plans do not meet the court order to cut air pollution in the shortest possible time. Some 40,000 people die prematurely from air pollution. Do we not deserve time for debate on that failure of Government policy?

There has been nothing about fair funding for schools or how much will be available. During the election, a school governor told me that their school managed to stave off making a teacher redundant this year, but what will happen next year? A head told me that she needed extra funds because sometimes she cannot make room even for young people living on the same street as her school. When will the Government bring forward new proposals on the discredited funding formula? The Government have become a minority Government because they are so far removed from the reality of people’s lives.

You may not know, Mr Speaker—you will be busy next week as it is Wimbledon fortnight; you must be pleased that your deputies have been elected—but it is the 20th anniversary of the first Harry Potter book, “Harry Potter and the Philosopher’s Stone”. I suggest a new book—Harry Potter and the Magic Money Tree. The Opposition say to the minority Government, “Expelliarmus!”