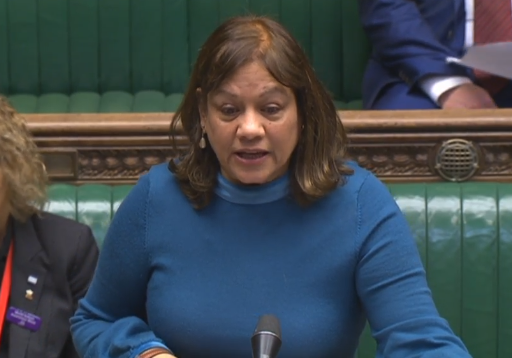 It is half time for the Article 50 process and regions are still anxious about what Brexit will mean for the. There has been no decision on the Northern Ireland border, the Government’s own analysis shows that a hard Brexit could cost Scotland’s economy £12.7 billion by 2030, and Wales is looking at other methods of economic development and new energy, one of which is the Swansea Bay tidal lagoon.

I thank the Leader of the House for the forthcoming business. Yet again, it is only for a week and a day. I also thank her for the list of ministerial responsibilities—it is in a Vote Office near you.

The Leader of the House announced the business after the Easter recess: it is just general debates. Can we have a debate on racism, particularly in light of the leaflet by Havering Conservatives, claiming that the Leader of the Opposition and the Mayor of London want to turn Havering into Hackney, Newham and other London boroughs—not like Essex? Will she condemn that leaflet, just as her colleague, the hon. Member for Grantham and Stamford (Nick Boles), has done?

I am going to keep asking until we get it: when will the Trade Bill, the Taxation (Cross-border Trade) Bill and the Sanctions and Anti-Money Laundering Bill return on Report? And I am going to ask again about the statutory instrument on postgraduate nursing bursaries—the Education (Student Support) (Amendment) Regulations 2018—that has been prayed against, but has not been listed for hearing. Indeed, the shadow Secretary of State for Education raised a point of order on this matter on Monday. Mr Speaker, you made it very clear that this House runs on conventions and precedents. That is why we want to debate when we pray against a statutory instrument. The Government appear to be throwing out the conventions of this House.

I ask the Leader of the House about the debate on early-day motion 1111 in the name of my hon. Friend the Member for Leeds East (Richard Burgon), praying against the Criminal Legal Aid (Remuneration) (Amendment) Regulations 2018. There is clearly plenty of time for this, because the Leader of the House has only scheduled general debates. Lawyers are at breaking point. They are concerned about cuts to legal aid, the burdens of disclosure and racial inequality in the criminal justice system.

Apparently, the Government Whips have said that there is no time for business, but the House adjourned early this week and last week. When will the Government lay that money resolution? The Homes (Fitness for Human Habitation and Liability for Housing Standards) Bill promoted by my hon. Friend the Member for Westminster North (Ms Buck), with which we all agree, still has no date to enter Committee. It seems that the Government do not want to fix any business and want to gag the Opposition by flouting conventions and fixing general debates. There is a danger that we will become like Northamptonshire County Council—a large, fancy building with a bankrupt Government inside.

Will the Leader of the House ask the Foreign Secretary to stop calling people names, including my right hon. Friend the Member for Islington South and Finsbury (Emily Thornberry), the shadow Foreign Secretary? He was hoping that that would be the headline. In political terms, it was a dead cat on the table, because the only name that he should have been using was that of Christopher Wylie, who gave evidence for four hours on Cambridge Analytica and possible breaches of electoral law during the EU referendum. Will the Leader of the House reassure the House that the Information Commissioner will get further resources to do these investigations, if she requires them?

As the Leader of the House has said, it is half-time for the article 50 process. The regions are still anxious about what Brexit will mean for them. In Northern Ireland, the people voted to remain. There has been no decision on a hard border, but the Department for Exiting the European Union has suffered the loss of Simon Case, who was director general for Northern Ireland and Ireland. Scotland voted to remain, and the Government’s own analysis shows that a hard Brexit could cost Scotland’s economy £12.7 billion by 2030. Wales, which voted to leave, is looking at other methods of economic development and new energy, one of which is the Swansea Bay tidal lagoon. Ken Skates, Cabinet Secretary for Economy and Transport in Wales, has said that Wales is “prepared to consider a loan and/or equity investment”.

It now needs the UK Government to declare whether they will support the development. My hon. Friend the Member for Neath (Christina Rees), who is sitting here, would be very happy to accompany the Prime Minister to have a look at the site of the Swansea Bay tidal lagoon while she is walking in Wales.

When will we have a statement on the Galileo satellite project? UK companies have been at the forefront of the technology. The Prime Minister is apparently scrambling to stop Britain being excluded from the project. Can we have a statement on what the Government are doing to ensure that the UK remains part of the Galileo satellite project and is not locked out of the Copernicus project?

I, along with 107 other MPs, met Alfie Dingley’s parents in Parliament last week. That was organised by the right hon. Member for Hemel Hempstead (Sir Mike Penning). Alfie had 150 seizures a month. Since he has been put on the medication, tetrahydrocannabinol, in the Netherlands, he has only had one. When will the Government agree to his medication exceptionally?

I want to pay tribute, along with the Leader of the House, to the very, very young councillor, and her commitment to public service too. It is absolutely heartbreaking for her parents.

I also want to pay tribute to the former Leader of the House in the other place, Ivor Richard. He had a distinguished career in both Houses as MP for Barons Court from 1964 to 1974, British ambassador to the United Nations from 1974 to 1979, and a European Commissioner from 1981 to 1985, before being made a peer in 1990. He was a brilliant parliamentarian in both Houses.

I thank you, Mr Speaker, and those in your office for their unfailing courtesy in helping me to do my work, and everyone else who supports me—all the Clerks and House staff, including the Doorkeepers, the House of Commons Library, the Official Reporters, catering and cleaning staff, postal workers, and especially security and digital services. I wish all right hon. and hon. Members a happy Easter. I hope that we can take on the Easter message of renewal and hope.