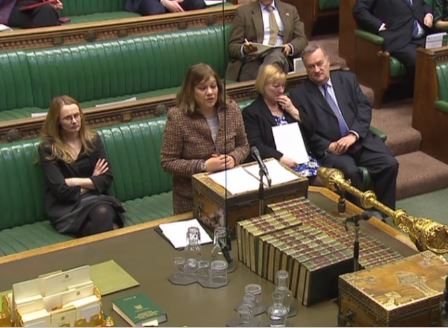 Following the trigger of Article 50, I raised various issues with the Leader of the House, Rt Hon David Lidington MP. My speech is below:

May I add my congratulations to the inaugural winner of your prize, Mr Speaker, which is very welcome? We have given refuge to Malala Yousafzai, who has also made an amazing contribution. We support everything that women in Pakistan do to promote democracy.

May I thank the Leader of the House for the forthcoming business? I am sure that he is also getting concerned that our Gracious Sovereign might not be aware of the date on which she is due to give her speech. Is he checking whether she is actually free on the various dates being suggested for the Queen’s Speech? Obviously I want to ask about the date of Prorogation as well. If the Leader could indicate when in May we are likely to rise, that would be helpful.

It is a convention that when a statutory instrument is prayed against, the Government provide time for a debate, so I want to raise the Opposition’s concerns that no time was provided to debate the regulations relating to personal independence payments and to tuition fees. Will the Leader of the House confirm that in future the convention will be honoured so that the Opposition will not have to use Standing Order No. 24 to get an emergency debate? That is extremely important because there will be a plethora of statutory instruments as we leave the EU and we do not want to return to powers being exercised by an absolute monarch when Parliament is sovereign and a democratic institution.

Not all of last Wednesday’s business was carried over, so will the Leader of the House find time for a debate on exiting the European Union and global trade? The House would like to know what the Department for International Trade has been doing during the past nine months. The Prime Minister said yesterday that everyone has been busy, but as yet the Secretary of State has not come to the House to tell us what global trade deals are in the offing.

Yesterday was a significant day in our island’s story, and we in Her Majesty’s Opposition want a strong and collaborative future relationship with the EU, the exact same benefits as we currently have as members of the single market and the customs union, and the fair management of migration in the interests of the economy and communities. We want to defend rights and protections, and to prevent a race to the bottom. We want to protect national security and our capacity to tackle cross-border crime and terrorism, and to ensure that any negotiation delivers for all regions and nations of the UK. That is a position of certainty, not the fall-back position of

“no deal…is better than a bad deal”,

which should not enter the Government’s vocabulary.

Is the Leader of the House aware that the CBI says that businesses would experience serious disruption if no new trading relationship is agreed and they are forced to trade with the EU under World Trade Organisation rules? No deal should not be an option. Manufacturers in the west midlands have asked, “Do I need to change my supply chain? Will I have to enforce new rules?” Those are just two of their questions, so may we have a statement on how the Government will answer such questions from business?

Could we have a debate on the National Audit Office’s report “Capability in the civil service”, which was published on 24 March? It says that the Government face ever-increasing challenges in providing public services. Continuing budgetary restraints are putting pressure on Departments, which are making important reforms with fewer staff and smaller budgets. There is a skills gap that cannot be filled by the private sector. The report says that one in four senior posts are unfilled. What will the Government do to address that skills shortage as we leave the EU?

When will NHS staff receive a pay increase of more than 1%, given that half the Cabinet have said that £350 million a week is now available for the NHS? Will the Leader of the House also set out how the Prime Minister will report back to the UK on the negotiations? Our children and grandchildren, 75% of whom voted to remain, feel hurt and betrayed, because they know that the EU is about equality, peace, security, collaboration, quality of life, the air we breathe, tourism, consumer rights and human rights. We must not betray them.

And so to R and R—rock and roll, and the recent death of the creator of that genre, Chuck Berry. It is as though he wrote some of his songs just for the Government. We have “Maybellene, why can’t you be true?” and “Reelin’ and Rockin’”—the Government have made some U-turns on national insurance contributions, and there has been disquiet about school funding and special deals with Tory councils—and there is one for you, Mr Speaker: “Johnny B. Goode”.

I want to thank all our civil servants for the work that they have done while we have been part of the EU. I thank all the ambassadors and Ministers for Europe, including the Leader of the House. As he was such an outstanding Minister for Europe, I hope that the goodwill will come back when we finish our negotiations.

I also want to say goodbye and thank you to David Beamish, the Clerk of the Parliaments, who, sadly, is retiring after 42 years. He is a great public servant who has done a fantastic job, and he worked closely with our own Clerk. I also thank Russell Tatam, an unsung back-room hero who has worked for both Labour and Conservative Opposition Whips. He has kept us all going. We wish him well in his new post at the Department of Health, and we hope that he can sort that out, too. Finally, may I once again thank everyone for everything that they have done in the last week, and wish everyone connected with the House a very happy and peaceful Easter?