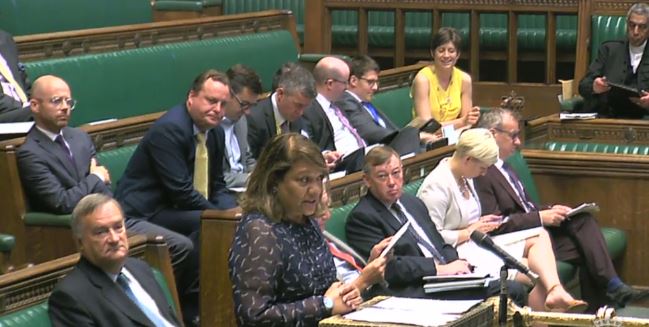 At Business Questions I raised various issues with the Leader of the House, Andrea Leadsom MP. My speech is below:

I thank the Leader of the House for the forthcoming business. She made no mention of the specific debates that I asked for last week on the High Court judgments concerning the plan for clean air and the benefits cap. She also made no mention of Opposition days, the last of which was in January. She made no mention of when she will schedule the debate on the statutory instrument on tuition fees, which the Opposition prayed against. That is particularly important in view of the latest Institute for Fiscal Studies report, which states that students will graduate with average debts of £50,800 after interest rates on student loans are raised to 6.1% in September, and points out that such interest rates are very high compared with current market rates. The report goes on to state that with their

“higher principal debt, students…from the poorest 40% of families now accrue around £6,500 in interest during study.”

The First Secretary of State said in a speech earlier this month that there is “a national debate that we need to have” about university tuition fees. I do not know where he was from 3 May to 8 June, but he actually got an answer: a minority Government. Will the Leader of the House please honour the parliamentary convention and let us debate that statutory instrument? It seems as though young people are being rejected by this minority Government.

May we have a debate on early-day motion 63, on the Women Against State Pension Inequality Campaign, which has so far been signed by 124 hon. Members from all parties?

The debate in Westminster Hall yesterday was totally oversubscribed—it was standing room only—so will the Leader of the House find time to debate this injustice to 1950s women, or are 1950s women also rejected by this minority Government?

So far, the financial black hole includes the £1.5 billion for the deal; the £2 billion hole in the public finances over the next five years left by the national insurance U-turn; the concession that was, quite rightly, made last week in support of women in Northern Ireland, but which not been costed; and the extra money that many Secretaries of State are asking for, such as the £1 billion for education and the money asked for by the Health Secretary. The financial black hole is getting bigger. The Government announced in the Queen’s Speech that they will have three Finance Bills over the course this Parliament, so will the Leader of the House say when we will have the summer Finance Bill? The Treasury has suggested such a Bill—that has certainly been picked up by the shadow Treasury team—unless, that is, there is to be no debate in Parliament, but just an announcement in Manchester in October.

“tell others who’ve got their own opinion to shut up…There is a sense you have at the moment of everybody doing their own thing…Nobody actually asserting very clearly what they want to do in the national interest…We can’t go on living from hand-to-mouth in this sort of shambolic way.”

It was the former Tory party chairman Lord Patten, and this is why he said it. This is the response on 3 July to a written question asked by my hon. Friend the Member for Hornsey and Wood Green (Catherine West):

“The government’s manifesto includes a free vote on the Hunting Act 2004, but we are not planning to bring forward a free vote in this session.”

“There was no education bill in Her Majesty’s Most Gracious Speech, and therefore the ban on opening new grammar schools will remain in place.”

Mr Speaker, you will remember that the Prime Minister was billed as the second incarnation of another female Prime Minister, whose nickname, for those of us who can remember it, was TINA—“there is no alternative”. We in Her Majesty’s Opposition—here we are—say: there is an alternative.