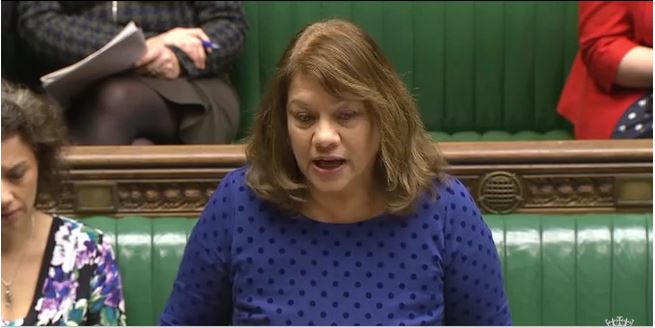 The Leader of the House helpfully published the dates for Easter, May day and Whitsun under Standing Order No. 25 on Monday. May I press him for one more date? He failed to say when the House would rise for the summer recess. Some people are suggesting that it will be on 20 July, but we are not sure.

Yesterday the Government finally accepted that they needed a plan, a strategy and a framework. The Leader of the House said yesterday that the Opposition were

I am sure that the British Film Institute is wondering where this genre falls! I should like to remind him that it was the intention of 40 Government MPs to support yesterday’s Opposition motion that resulted in the Prime Minister conceding—from Bahrain—to the Labour motion. Where was the tarantula? The spider was missing, too. As ever, the message is confused. The Chancellor is saying that we are going to be out of Europe but that we will actually be in and we paying for it. So we are out but we are in; it sounds like Government hokey cokey.

The situation is confusing for everyone, including our farmers. May we have a debate on the effects of exiting the EU that are causing concern to our farmers? In 2014, the UK exported £12.8 billion of products to the EU, which was approximately 73% of our total agri-food exports. May we have response to the letter to the Prime Minister signed by 75 organisations asking for tariff-free access to the single market and a competent reliable workforce? Those organisations want protection for food safety, security and hygiene, and proper stewardship of our countryside, and they say that affordable food will be at risk if Ministers fail to deliver continued access to labour and the best possible single market access.

May we have a debate on the report on opportunity and integration? If this Government were serious about opportunity and integration in this country, they would reverse the £45 million cut in English for speakers of other languages, which affected 47 colleges and 16,000 learners. I know of a learner under ESOL who learned English, learned to drive and is now a driving instructor—oh, and she just happens to be a Muslim woman. Members around the House will be able to find similar examples of people taking opportunities as a result of ESOL. Will the Leader of the House ensure that the Government restore grants to local authorities, so that libraries, community facilities, the provision of skills training, and prevention work with families are not cut? Will he also ensure that they restore the migration impacts fund, which was set up by the former Prime Minister Gordon Brown and then cut by the coalition Government in 2010? It was included in the 2015 Conservative manifesto as the “controlling migration fund”. They can change the name, but they have not yet introduced it.

We must support our schools and ensure that the Equality and Human Rights Commission remains funded, independent and able to scrutinise the equality impact of policies and legislation. As we will celebrate Human Rights Day on 10 December, may we have a debate on protecting the Human Rights Act, which is an important piece of legislation? Some have argued that the UN declaration that became the European convention on human rights was just a moral code with no legal obligations, but the Human Rights Act gives it legal force. Every right that was incorporated in the Human Rights Act was systematically violated during the second world war.

Given that it is soon Human Rights Day, will the Leader of the House follow up on the Prime Minister’s response to the request from my hon. Friend the Member for Hampstead and Kilburn (Tulip Siddiq) to secure the release of Nazanin Zaghari-Ratcliffe, a British national imprisoned in Iran? If the Foreign Secretary is too busy trying to learn who his counterparts are, perhaps we can ask the United States, which signed that agreement with Iran. We need the Human Rights Act to protect basic freedoms—every day, everywhere.

There have been two electrical overload near misses on the parliamentary estate and we still, through no fault of our own, cannot turn off the lights in Norman Shaw South. Will the Leader of the House update us on that?

The hon. Member for Strangford (Jim Shannon) and the Speaker’s chaplain Rev. Rose Hudson-Wilkin both received awards this week. The whole parliamentary family acknowledges and congratulates them.

As for Her Majesty’s Opposition, we will be carrying on regardless—[Laughter.] Wait for it. We will carry on regardless, trying to secure economic and social justice for all British people.