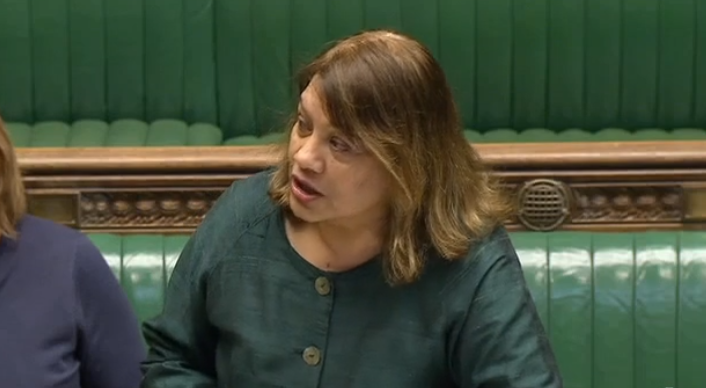 At Business Questions I raised various issues with the Leader of the House, Rt Hon David Lidington MP. My speech is below:

I thank the Leader of the House for the forthcoming business and add my congratulations to the hon. Member for Perth and North Perthshire (Pete Wishart). Perhaps it will be a case of him singing to us, rather than us singing to him.

Are we any nearer to having a date for the Queen’s Speech? I am sure that the person delivering it would like to know when it is.

I gave the inaugural Emily Wilding Davison memorial lecture at Bedford College and Royal Holloway yesterday. As you know, Mr Speaker, she broke into the House of Commons a few times, most memorably on census night. It was said that she knew the House’s maze of pipes and hidey-holes far better than all the other suffragettes. She therefore had a lot in common with my hon. Friend the Member for Rhondda (Chris Bryant).

May I press the Leader of the House on a date for the debate on restoration and renewal? Members need to know that and need to have their say. It might be helpful, at the time of the debate, to have a display so that Members can see what is at stake and have an informed debate, rather than one based on speculation. I know that a date has been mentioned, but perhaps that was just a gentleman’s agreement and ladies are not allowed to know.

I note that the European Union (Notification of Withdrawal) Bill is coming back to the Commons on Monday. Once the Bill goes through, it will truly be the end of the Thatcher legacy, because the former Prime Minister signed up in 1981 to EU enlargement through the accession of Greece, in 1983 to the declaration on more European integration, in 1986 to EU enlargement through the accession of Spain and Portugal, and in 1987 to the Single European Act to create a single internal market. Yet she was also able to say no: she renegotiated the EU budget in 1984, said no to the 1985 Schengen agreement, and said no to the 1989 social charter—wrongly, in my view. Margaret Thatcher was a remainer and a reformer; the same cannot be said of this Government.

And so to the Budget. It is not so much “Spreadsheet Phil” as Punxsutawney Phil from groundhog day. He is being chased back down his hole by the self-employed and the Brexiteers. There was no mention of the most challenging events that will happen to this country in the next few years. He did not use the word “Brexit” once—not verbally, not in his speech, not in the Official Report. What he did say was that he

Will the Leader of the House clarify whether that means tuition fees will be abolished? The Chancellor talks about Germany’s productivity being better than ours. Germany abolished tuition fees. Maybe that is something we can learn from Germany.

The Chancellor said that money was available for investment in school condition. Given that the right hon. Member for Surrey Heath (Michael Gove) said he regretted cancelling the Building Schools for the Future programme, will the Leader of the House make representations to the Chancellor to enable all schools allocated funds under the scheme to receive them without having to make bids that take money away from frontline services?

Will the Leader of the House confirm whether the money for research for 1,000 PhDs is a grant or a loan? I thought I the Chancellor say “loan”, but I cannot find it in the Official Report. [Interruption.] If hon. Members do not want to hear they should just leave the Chamber.

Was the Leader of the House aware of the discussions around the gentleman’s agreement in Surrey? Will he launch an inquiry or make a statement to the House? An MP was involved “who has worked really hard behind the scenes”, and there is a reference to a Member whom we both know very well. May we have a statement on what exactly is on offer under this deal? Step one: councils threaten to increase council tax. Step two: they make a phone call to the Communities Secretary, who then pops over to No. 11 in his car. Then, lo and behold, there is a deal—a gentleman’s agreement that is not transparent and is just for Tory councils.

Will the Leader of the House ensure a breakdown of all business rates goes to each council when the transition is made, so hon. Members do not have to make freedom of information requests of their councils? The council tax burden will now shift totally and utterly to local taxpayers. Oxford Street in my constituency does not have any businesses. This will have a direct effect on many of our constituencies.

The Prime Minister said, when she first stood in Downing Street:

“When it comes to opportunity, we won’t entrench the advantages of the fortunate few”.

Yet the Prime Minister made it clear the Government are promoting selective schools. Can the Leader of the House confirm that children who cannot afford tutors, who will enable them to get into selective schools, will be given help? Schools are good because of the hard work of the pupils and their teachers. The Government cannot take credit for that.

Finally, it was a male-dominated International Women’s Day. Maybe next year there will be no “Spreadsheet Phil”, but “Spreadsheet Justine”. I want to bring women back to the centre. Gandhi said that if you educate the mother you educate society. How can we forget what was said about Ginger Rogers: she did everything Fred Astaire did, but backwards and in high heels? There is the Chinese proverb that women hold up half the sky. Finally, there is the new hashtag: #neverthelessshepersisted. That is what we all have to do to get true equality. A belated happy International Women’s Day to everyone.