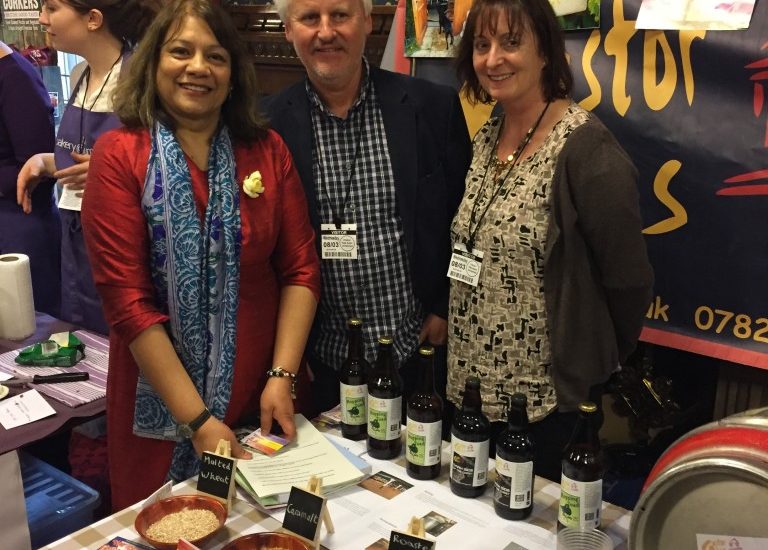 Many local farms diversified with making crisps, Corkers Crisps (owned by Rod Garnham and David Glennan), to ale and delicious sausage rolls. Frances Reid, a local bread maker at The [email protected] told me she emailed out her orders and when people picked up their order it was as though they were in a shop exchanging information and chatting.

Above I am pictured with Duncan and Gill Vessey owners of Castor Ales, a brewery dedicated to the production of fine quality real ales, located in the village of Castor, on the outskirts of Peterborough. Castor Ales supports the local economy and provides beer with a minimum of food miles and low carbon footprint. It does not sell beer through supermarkets but to local independent retailers.

I also met with Tracy and Andy Johnson the owners of local butcher Johnsons of Old Hurst, Rob Marsden an olive oil producer at Olive Olive, Tony Hobbs and Mike Fagan owners of Cromwell Cider and Jonny Fuller owner of Spinney Abbey. It was good to meet small producers.

NFU Brian Finnerty (Regional Communications Adviser, East Anglia) and Jim McKeane (Bedfordshire & Huntingdonshire County Adviser) were also at the event to represent all farmers and growers in England and Wales. Last year I signed the NFU’s post-referendum pledge to Back British Farming to ensure that we build a domestic agricultural policy which is adapted to our needs, easy to understand and simple to administer. The UK’s decision to leave the European Union has implications for British agriculture. There are 11 farms in Walsall South which could be effected.