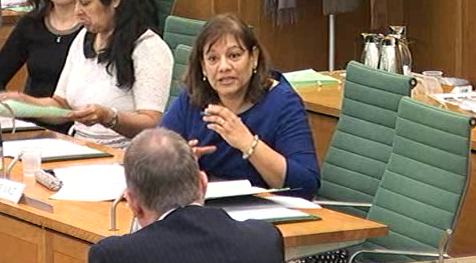 On Thursday 27 March 2014 the Committee discussed Clause 50 of the Criminal Justice and Courts Bill.
Valerie said:
“We come to an important part of the Bill that goes to the heart of the relationship between the citizen and the state, and how it has been curbed. Over the past three weeks we have discussed, debated and listened to witnesses talk about this important Bill. My concern is that the Government are getting a reputation for being authoritarian, wanting to stifle due process and calling people names if they object—some of the witnesses were called left-wing. The Bar Council and the Law Society are not hotbeds of radicalism but independent bodies that have to focus their attention on what happens to their members and how they can assist them. We need to hear their views because they are the practitioners who will have to work through the proposals. The clause strikes at the heart of the ability to hold decision makers to account. The Government are asking judges to look behind and interfere with decisions, but that is not their role.”
“Parliament passes legislation and gives the Executive—the Government of the day and their staff—the power to put those laws into effect, and judges look at whether that power is exercised in a lawful way. That is the golden triangle: the judiciary, the Executive and Parliament, each with its specific constitutional role. The clause and others in part 4 seek to bind the judiciary and instruct them how to operate. The judiciary are not experts in the fields in which those decisions are made; their role is only to review the lawfulness of the decision. As Lord Bingham put it: ‘They are auditors of legality’.”
“There is nothing malevolent about judicial reviews. I have gone through many myself—even on behalf of the Government. I asked for evidence of excessive judicial reviews as the clauses are not based on evidence. The figures from the Ministry of Justice are clear: from 2000 to 2012, criminal JRs increased from 336 to 358—a rise of only 22 over 12 years. Civil JRs, other than immigration and asylum cases, increased from 1,752 to 2,118—an increase of only 366. There has been an increase in immigration and asylum cases—from 2,150 to 9,958—but they are going to be moved to a separate tribunal.”
“The Lord Chancellor has said that many judicial reviews are “totally without merit”, but judges decide that now. When they refuse permission, they can certify that a case is TWM. From 1 October 2012 to 30 September 2013, the proportion of cases certified as TWM was 31% for immigration and asylum cases, compared with 14% for civil cases. Judges have also started the practice of certifying cases and making orders to say that people may appeal from abroad, so there is no bar to deportation.”
“Parliament should not be telling judges how to run their courts. That is for the procedure committees and rules committees to do. Courts consistently issue practice directions when they feel that cases are not being run properly. The Government must consider carefully whether they want to embark on a constitutional collision course, as many witnesses told us. I hope not, so I asked the Government to remove the clause from the Bill.”
More information about the Public Bill Committee on the Criminal Justice and Courts Bill can be found here: http://services.parliament.uk/bills/2013-14/criminaljusticeandcourts/committees/houseofcommonspublicbillcommitteeonthecriminaljusticeandcourtsbill201314.html