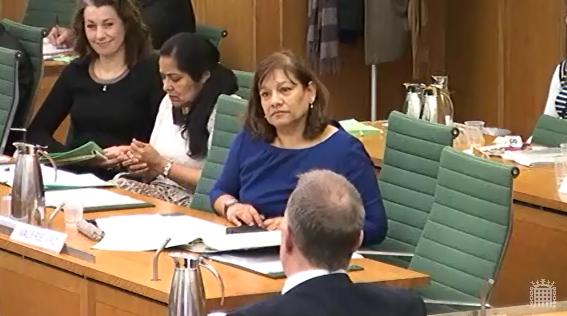 On Tuesday 25 March 2014, the Committee discussed Clause 26, Trial by Single Justice on the Papers.
Valerie said:
“I set out my concerns about the clause and the provision that would allow magistrates to sit as a single justice in certain circumstances. In my view there are two main grounds: First, the provision offends the basic principles of the justice and legal system in this country. Secondly, it will not do what is intended, which is to save costs.”
“I was dismayed and disappointed by the Minister’s saying that he needs to speed up the whole process, because justice—like democracy—is hard fought, hard won and takes time, and we need to examine the issues carefully.”
“We are told that single magistrate will be used in straightforward cases, but that is all the more reason to have those cases heard in open court and not in some side room, as has been suggested. It is necessary to have formality of a court, particularly when it is pronouncing a judgment or making an order. A single magistrate goes against what the magistracy was established for in the first place. The magistracy should provide two or three magistrates with a broad experience of life, from different backgrounds and reflective of society, to sit in judgment on a case. From Magna Carta—which we will soon celebrate—onwards, the accused has had a right to a fair trial.”
“Saving costs is the key plank of the clause. As we have heard, the accused could turn up at the last minute. If we look at the amendments to the 1980 Act we see that the clause is littered with situations where magistrates have to adjourn cases in certain circumstances. I point to new section 16D(3), or new section 16C(2), whereby a person has been tried under single magistrate procedure and the single magistrate wants to disqualify them but has to give them an opportunity to make “representations”, so if the person is not there, the case has to be adjourned. That will not save costs. It looks as if cases will be adjourned left, right and centre if someone turns up at the last minute, which they are likely to do, or if things get difficult.”
“If the single magistrate wants to issue a summons requesting that someone attend court, logically that defeats the purpose of having a hearing before a single magistrate, because new section 16D(3) says that if a single magistrate issues a summons, lo and behold, the case has to be tried by a district judge or two justices in open court. This is “simplified” procedure, but we have a procedure now whereby we could end up with a situation where the usual route—if it had been used in the first place—would have been much more cost-effective and efficient.”
“There is not consistency of sentencing now, so how can we be sure that the relevant reasons have been taken into account in a closed courtroom? People go to open court for all sorts of reasons. They go to see how it works. They go as students, as jurors or because they have to defend themselves. That is all the more reason why all cases should be conducted in open court.”
“The Government have proposed the clause as if it is a simple, straightforward procedure, and it is clear that it is not. There appears to be an assumption that we are talking about the simple, straightforward paperwork or box work that district judges undertake. These cases are not simple box work; they are much more complicated.”
“Lord Bingham said that magistrates are a ‘democratic jewel beyond price.’ I urged the Government to think again about the clause and allow magistrates to do what they do best, which is to ensure that justice is done.”
More information about the Public Bill Committee on the Criminal Justice and Courts Bill can be found here: http://services.parliament.uk/bills/2013-14/criminaljusticeandcourts/committees/houseofcommonspublicbillcommitteeonthecriminaljusticeandcourtsbill201314.html