Last season finished on a high with the team being unbeaten after a 20-game-run and getting a promotion spot to the West Midlands (Regional) League Premier Division for the first time in six years.

Darlaston were unfortunately unable to penetrate the Shifnal backline and the final score was 6-0 to Shifnal Town F.C.

I wish the team the best of luck in the new season.

You can find a calendar of Darlaston Town (1874) F.C.’s upcoming games here. 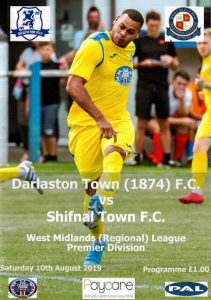