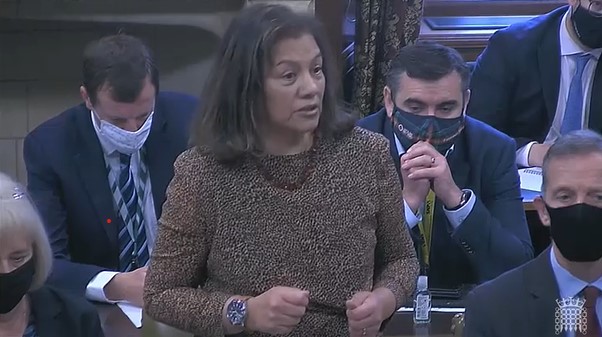 My colleague Tulip Siddiq MP in whose constituency Nazanin, Richard and Gabriella live, secured a debate in Westminster Hall on Tuesday 16 November 2021 as Nazanin has not yet come home from Iran. It was a packed Westminster Hall and Richard was in the audience. The MPs sat in all the seats and some had to stand. I had made a promise to Richard during his first hunger strike outside the Iranian Embassy that as the then Shadow leader of the House I would raise Nazanin, Annoosheh Ashoori and added Morad Tahbaz and Mehran Raoof every Thursday at Business Questions. I kept my word. I am grateful to Patrick Grady MP for mentioning that I did this.

There was a limit on how many MPs could speak. However I intervened:

“Very briefly, I thank my hon. Friend the Member for Hampstead and Kilburn (Tulip Siddiq) and wish her and my hon. Friend the Member for Lewisham East (Janet Daby) well. The Ratcliffe family, and Anoosheh Ashoori, Morad Tahbaz, who was born in Hammersmith Hospital, and Mehran Raoof are all British citizens. The Hague convention applies to them; they can get diplomatic protection. If the Minister would only look at the Hague convention, he would find that it takes other factors into account. More importantly, why do we not harness the spirit of Lewis Hamilton at the Brazilian grand prix, and realise that there is not a single obstacle that is going to stop us bringing home our Nazanin, Anoosheh, Morad and Mehran?”

It has been reported that the debt owed to Iran by the British Government could be linked to the hostage taking. The fact is the debt was owed in 1996 and proceedings in the Courts have been adjourned since April 2021. It is a matter of public record and the Chair of the Debate ruled that it was in order to speak about the debt. It was not sub-judice. It cannot be as it is acknowledged by the Government that the debt is owed and should be paid- £400million in lieu of tankers that were never delivered.

It has been stated that under the Hague Convention Article 4 a state may not afford diplomatic protection to one of  its nationals against a state whose nationality that person also possess but international tribunals beginning with the key International Court of Justice Nottebohm case have started switching form the binary principle set out in the Hague Convention to the predominant or effective nationality. Britain may have arguably moved towards the position that when assessing dual nationals eligibility for diplomatic protection, the mere possession of citizenship is not the only factor to be taken into account. Other factors are now taken into account such as family ties, attachment through children participation in public life. That definition would mean Annoosheh, Morad and Mehran could also qualify for diplomatic protection.

The UK has a diplomatic service brimming with talent . This is the best kept secret. The work towards the Good Friday Agreement shows the art of the possible. Calling on the help of other countries and those who were part of bringing peace to the island of Ireland could unlock these cases. But people want to travel to Iran freely to see the beautiful Persepolis and the aptly named the Gate of Nations.

All nations and in parliament of all parties came together to voice their support to bring back home our fellow citizens, Nazanin, Anoosheh, Morad and Mehran and others who are incarcerated and innocent of any crime.