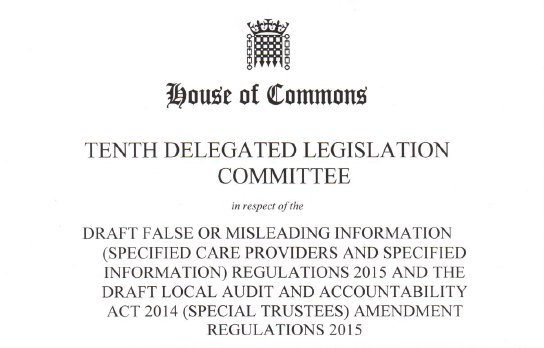 On Wednesday 18 March 2015 the Tenth Delegated Legislation Committee, of which Valerie sat as a member, scrutinised the Draft False or Misleading Information (Specified Care Providers and Specified Information) Regulations 2015.
Valerie said:
“I would like to clarify something that may be in the original Act or in subsequent regulations. Is there a definition of false or misleading in material respect, and are there any defences that providers could have for not providing the information?”
The Minister responded:
“I hope I covered that in the material that was provided to the Committee. There is a general understanding in legal parlance of what “false or misleading information” should mean. As I outlined, whether someone has connived knowingly or actively or has neglectfully decided to withhold information or to present information, as contained in the regulations, that is misleading or false in some way is a matter that will have to be determined, as this is a criminal offence. There is a defence if someone has performed due diligence and taken all steps to perform their duties in a diligent manner. Again, that is a matter to be determined if a prosecution is brought.”
“It is important to point out that, as with the primary legislation, the regulations are not about going after individual clinicians or front-line staff; they deal with corporate entities—a hospital or a hospital provider—and, if appropriate and if the offence is proved at a corporate level, with those people at senior board level and other senior officials working in such organisations who have acted to mislead the public. We know how important it is to recognise and be transparent and open about situations when care falls to a substandard level, so that improvements can be made.”
“There is clearly an active mind at work in making a decision to withhold information or to be actively misleading, so there is that proactive approach. There is also woeful negligence. There are situations in which a reasonable person would have acted in a particular way but an organisation was negligent in the corporate duty that it would normally have to report information to patients. The regulations define the information that has to be reported, which makes clear to organisations what they need to report. Much of what is contained in the regulations does not necessarily put a new emphasis on reporting; rather, it makes the importance of factual and accurate reporting clear. The measures build on the good reporting that goes on in many hospitals every day.”
More information about the regulations is available here: http://www.legislation.gov.uk/ukdsi/2015/9780111129234