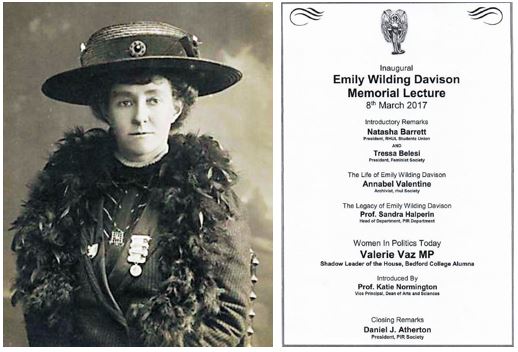 I was delighted to be asked to speak at the Inaugural Lecture of the Politics and International Relations Society on International Women’s Day at Bedford College and Royal Holloway. Daniel Atherton the President gave me a broad topic – Women In Politics today.

Although I was at Bedford College during my undergraduate years, it was located in Regents Park before merging with Royal Holloway and is now at Egham. Old Bedfordians get very upset when Bedford gets dropped from the title particularly as Bedford College was the first college to educate women to higher degrees and first to award those degrees; And when I hosted an event at the House –9 May 2012 a reunion of amazing women – from 1938 – how incredible they were – the pioneers both in terms of their degrees and what barriers they broke down so we could follow on, they insisted that Bedford was retained so the Bedford Society was launched and they have contributed amazingly fundraising.

And at my maiden speech I invoked the golden thread that ran from Emily Wilding Davison hiding in the House of Commons fighting so we could get a vote to enable me to stand on the floor of the Chamber as a Member of Parliament; I am not sure if I would have endured being arrested, being forcibly fed, Had a hose pipe turned on me or endured hunger strikes; but the story that captures all our imagination is one of where she was on census night: Great stories of her constantly breaking into the House of Commons and knowing her way around; It’s easy to get to it’s near the chapel St Mary’ Undercroft.

And the broom cupboard is there; and the plaque – which records that she was there on census night in 1911; A brave wonderful woman – and all of us women owe a debt to her suffragettes and suffragists; That is why I can’t understand why women don’t vote in elections – even if they just put a comment on their ballot paper. I’m with Clare Balding in her documentary. Emily was
fizzing with energy, and perseverance – I think she was killed accidently pinning the scarf to the horse. But if anyone wants to come and visit let me know: with a tour. Women were only allowed in the gallery behind a grill, the Grill that the women tied themselves to is now in Central Lobby.

Parliament wants to record this and to celebrate the 150th anniversary of the mass petition presented by John Stuart Mill on 7 June the Speak advisory Committee on works of Art commissioned the Artist Mary Branson to commemorate that petition calling for women’s suffrage. Scrolls to represent Acts of Parliament and are illuminated with the rise and fall of the tide. I have a painting by Sylvia Pankhurst of a young girl helping a potter. Sylvia wanted to catalogue women’s work but as women were barred from the hilghly skilled jobs so they turned the wheels and the lathes for the men.

When I first started out I stood in an unwinnable. They tell you to go away and get experience and many of us did go into local government, as a councillor the selected in an unwinnable ;– manged to save the deposit: Twickenham. Margaret Thatcher got me involved in politic-s grants were cut and public service cuts; my brother heard me shouting at the tv and told me to do something not just sit there and our parents never distinguished between what my brother could do and what my sister and I could do. They said girls can do anything;

After 25 years I got in. And there are only 196 of us currently in the house. but the parliamentary labour party has 43% women and had to use the mechanism of all women shortlists to make any meaningful progress. After I was elected, using the time I had at Bedford science degree, I wanted to find out why the figures of women in stem subjects were so low. All those clever women who I was an undergraduate with why was that talent wasted. I was a member of the Health Select Committee we sit and hear evidence on a cross party basis. We can do that because we hear the evidence and reports are based on that evidence in all our names on it so I read every word because it is a publication of the House and how it reflects on Parliament. Ads a member of the Shadow Cabinet and Shadow leader of the house its an interesting role. I craft my speeches carefully by myself and yet people still say its very good who writes your speech for you?

We know the statistics: Only 5.3% of all working women work in science engineering and technology compared with 31.3% of all working men; The gender pay gap – from 9 November women are effectively working for nothing. Women carry out carry out an average of 60% more unpaid work than men; only 5.5 of chief executives in FTSE 100 companies are women; I supreme court judge is a woman but only because they used transferable skills to appoint her. She was an academic. 75 million girls not in education around the world;

And that’s why we need to have our voices heard; From Constance Markowixc the first woman elected to parliament to Margaret Pereira the forensic scientist. Early in her career, she developed a highly sensitive method of investigating minute bloodstains to determine the ABO blood type of an individual. It was adopted worldwide as the Nicholls and Pereira (or N&P) method, Lewis Nicholls being her laboratory director. She had hoped to become a doctor but in post-war years, medical schools were giving preference to returning service personnel and she was unable to secure a place.
It’s important for us to dig out the stories of pioneering women unsung heroines; And tell HER story.

Whether it is Ghandi’s comment, educate the mothers you educate society to Ginger Rogers she danced as well as Fred Astaire but had to do it in high heels and backwards -or the Chinese proverb we hold up half the sky; it is in places like this, with people like you that sow the seeds for women to challenge, empower and push back the frontiers to teach Young people in our quest for justice and equality for the generations to come.

I wish you a Happy International Women’s Day;