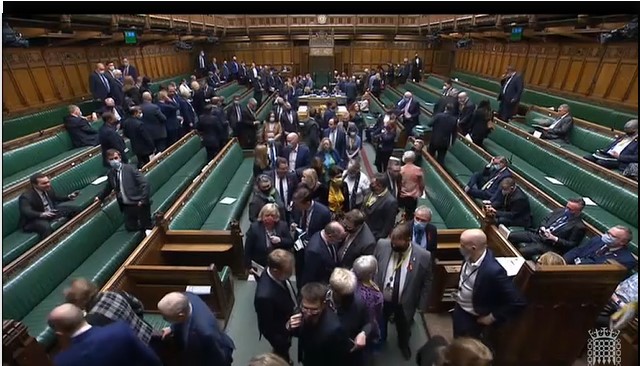 The Finance (No. 2) Bill was debated in the Commons on Wednesday 1 December 2021. The Bill is in its Committee stage and was debated as a Committee of the whole House.

The House voted on whether to keep the surcharge for bankers in the Bill. Ayes -301- Noes-206.

‘(1) The Government must publish a review of the operation of the Economic Crime (Anti-Money Laundering) Levy by 31 December 2027.

(a) an assessment of the contribution to the effectiveness of the Levy that such a register would make; and

(b) an update on progress toward implementing such a register.’—(James Murray.)

This new clause will put into law the Government’s commitment to undertake a review of the Levy by the end of 2027, and require them to publish an assessment every year until a register of beneficial owners of overseas entities that own UK property is in place an assessment of what impact such a register would have on the effectiveness of the Levy, and progress toward the register being established.

‘(1) The Chancellor of the Exchequer must, within three months of the passing of this Act, lay before the House of Commons and publish a review of the impact of measures contained within this Act that relate to the publication by HMRC of information about tax avoidance schemes.

(2) The review undertaken by the Chancellor under subsection (1) must include commissioning an independent assessment of the information published by HMRC about disguised remuneration loan schemes.

(a) HMRC’s approach to the loan charge scheme; and

(b) recommendations for altering that approach.

(4) The Government must before the review commences make a statement to the House of Commons stating what efforts have been taken to guarantee the independence of the assessment under subsection (2).

(6) The Government must every six months after the publication of the review in subsection (1) make a statement to the House of Commons stating what progress has been made towards implementing any of the recommendations that arise from subsection (3)(b) which the Government has accepted.’—(James Murray.)

This new clause would require the Government to review the impact of measures contained in clause 85 of the Bill, and as part of that to commission an independent review of the information published by HMRC about disguised remuneration loan schemes. This independent assessment must consider HMRC’s approach to the loan charge scheme and consider recommendations for altering that approach, and the Government would be required to state to the House its response to the recommendations.