HomeNewsFirst Memorial For An Asian Woman.

First Memorial For An Asian Woman. 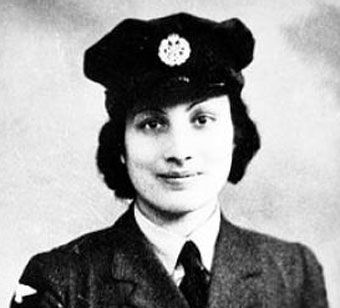 A bust of Noor Inayat Khan will be unveiled in Gordon Square, London, as a memorial to honour and recognise her extraordinary bravery in the Second World War.
Valerie said:
“I raised the issue in Parliament in 2010 when I tabled Early Day Motion 109 which received cross party support.As an alumna of the University of London, I wrote to the Vice-Chancellor of the University to request permission for a commemorative bust of Noor Inayat Khan to be placed in Gordon Square near her London home. I would like to thank former Vice Chancellor Graeme Davies and Vice Chancellor Geoffrey Crossick for agreeing to my request to place the memorial on the Unviersity of London’s land.”

On 25th October 2012 I was happy to announce in Parliament that a bust, sculpted by Karen Newman, will be unveiled on the 8th November 2012.”

“Noor’s story is told in two books, by Shrabani Basu in ‘Spy Princess’ and another book on Noor by Jean Overton Fuller is inspiring. During World War Two, Noor Inayat Khan worked for the Special Operations Executive, Churchill’s secret organisation. Acting bravely behind enemy lines, she ultimately sacrificed her life for our country and was executed in Dachau concentration camp.”
“Noor was posthumously awarded the George Cross as one of only three women in Winston Churchill’s Special Operations Executive and was also awarded the Croix de Guerre by France. I am immensely proud to have helped with this project to provide the first memorial to a British Asian woman, this will be an wonderful opportunity to remember a true British heroine.”
For more information on Noor Inayat Khan and the Memorial Trust please click here.

To read the Valerie’s remarks in the House of Commons on Thursday 25 October 2012 click here.
Karen Newman’s website can be found here.