It was a very sad day at Sandwell Crematorium on the 19 July 2021. A service was held to remember the life of George Makin, a local journalist.  George was steeped in journalism in Walsall and also had other interest  such as in politics and photography.  It was very sad to hear of his passing so soon after he was diagnosed with lung cancer. My condolence goes to his wife deb and their children.

George was always a entertaining character. As a photographer, he recorded life in and around Walsall.

The service was taken by his step-daughter Hannah Gilbert and the music were all chosen by George before he died. 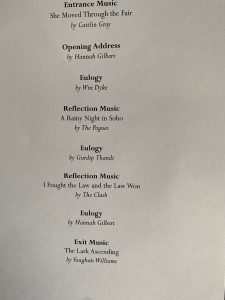 As an avid birdwatcher, the service closed with the haunting The Lark Ascending by Vaughan Williams. George was an optimistic character and always good fun and he will be sorely missed by his family and his friends and all those who knew him through his political work as local democracy reporter. George’s aim was to hold all the elected politicians to account. Donations was given to Sightsavers and Dean Harper conducted the funeral (The Dean Harper & Funeral Directors 21-23 Lichfield Street, Walsall, WS1 1TJ).