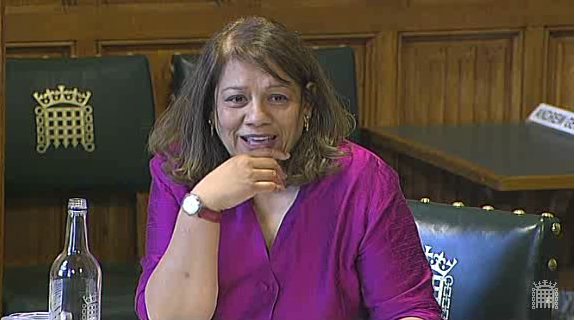 The Health Select Committee, of which Valerie is a member, heard evidence on NHS patient data from Kingsley Manning, chair of the Health and Social Care Information Centre and Max Jones, director of information analytics at the Health and Social Care Information Centre.(HSCIC)
Valerie said:
“The way patients’ confidential data is handled should be of the utmost importance to the NHS. I am concerned about the accountability of the arms-length organisation(HSCIC) ”
“In the previous session on Tuesday 25 February 2014 I had asked questions on the costs of care.data. I was concerned that neither NHS England nor HSCIC were able to answer these questions at the meeting. They responded in a joint letter to the committee. I asked Mr Jones for further costings of care.data as the letter only provided a figure of £1.17m spent to date. Mr Jones told me that this figure was just for the staffing of HSCIC to support care.data. There is also the cost of £140,000 that is from an existing contract for a GP extraction service that inputs into care.data. When I asked if HSCIC have confidence that ATOS had the confidence of HSCIC given their record with public sector contracts, Mr Jones said the software will be successful and Atos have a good records, despite recently pulling out of another Government contract. He acknowledged that this information was not originally provided in the response.”
“I asked Mr Manning about the 6 months pause to care.data, and if after 6 months they will proceed with care.data. Mr Manning explained that he did not have the responsibility for cara.data’s launch and that it was down to NHS England. I asked Mr Manning for a time frame and he told me ‘that the intention is to proceed in October, at the end of the six-month pause’ but that was ‘subject to further announcements by NHS England and further changes’ and that this date was still flexible. I asked about accountability for care.data and Mr Manning told me that Tim Kelsey, National Director for patients and Information for NHS England, was the senior responsibility officer and that he was ‘not in control of it’. I am concerned that Mr Kelsey and NHS England were not present to answer the questions given NHS England are in charge of care.data. ”
“I asked Mr Jones about the Institute of Faculty of Actuaries use of the HSCIC logo in one of their reports. He told me the ‘organisation used our logo without coming to us to seek our permission to do so,…under the terms of that agreement they were required to show a copyright statement in their publications’. Mr Jones did not appear to be aware of the content of the data-sharing agreement that allowed this use of the logo. This is a contract that allows companies to use patients’ data for profit. Mr Jones could not tell the Committee what action has been taken against the Institute of Faculty of Actuaries for using the logo.”
“The lack of accountability is alarming given that the HSCIC were not aware until I showed them a letter of apology from a Minister who had made an incorrect statement to the House on Thursday 27 February 2014. The Minister told the House that the data provided to Institute of Faculty of Actuaries was ‘anonymised and publicly available’ when in fact it was ‘pseudonymised’ with the Faculty to publish the information as ‘anonymous information, with all identifiers stripped out’. The record was corrected on Monday 3 March 2014. When I asked Mr Jones about this he said ‘This isn’t ringing any bells’.”
“This organisation is responsible for patients data and there seems to be a lack of understanding or accountability of patient data so far. They do not appear to be aware of what is going on or any accountability for decisions relating to the care.data project.”