HomeNewsHealth Committee Inquiry into Complaints and Raising Concerns in the NHS

Health Committee Inquiry into Complaints and Raising Concerns in the NHS 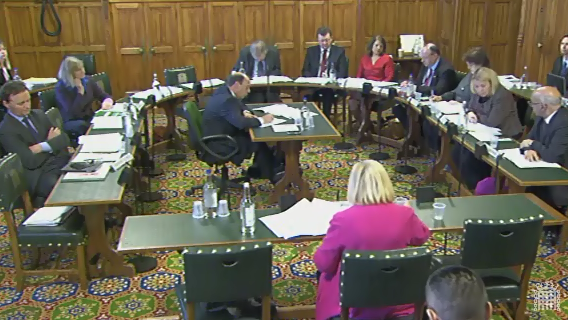 On Tuesday 11 February 2014, the Health Select Committee, of which Valerie is a member, launched an inquiry into Complaints and Raising Concerns. The witnesses were: Rt Hon Ann Clwyd MP, Anna Bradley (Chair of Healthwatch) and Robert Francis QC (Chair of the Patients Association).

The Health Select Committee, of which Valerie is a member, heard evidence on complaints and raising concerns in the NHS. The Committee heard evidence from Ann Clwyd MP, Robert Francis QC, Chair of the Patients Association, and Anna Bradley, Chair of Healthwatch England.

‘A Review of the NHS Hospitals Complaints System Putting Patients Back in the Picture’ by Ann Clwyd MP was published in October 2013. I asked whether there is a way of triaging concerns and complaints because not everyone would want to go down the route of calling it a complaint. Mrs Clwyd suggested that the procedure used in Central Manchester University Hospitals, where a director or deputy director is assigned to act as an independent advocate on behalf of the complainant was a way forward.

The Government have not provided a response to the recommendations or proposed a timeframe for implementation of the recommendations. Neither the Clwyd Report or the Francis Report has been debated in the House. In my view, what a ‘complaint’ and a ‘concern’ should be defined at a local level before ombudsman stage.

Healthwatch England is the independent consumer champion that gathers and represents the public’s views on health and care services. I asked Anna Bradley if a case could be made for having one place for patients and families to go to such as Healthwatch. I suggested that to streamline the whole process, the local Healthwatch could absorb the Independent Complaints Advocacy Services (ICAS) and Patient Advice and Liaison Service (PALS) so everyone knows where to go and are given the appropriate advice and assistance.

I also suggested that the “fundamental standards” as described in the Francis Report could be put on posters around the hospitals and publicised so people know what to expect. Robert Francis QC agreed, once they are agreed.