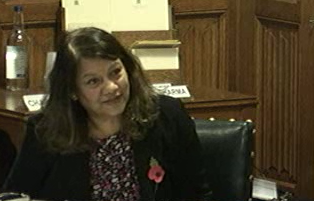 On Tuesday 11 November 2014, the Health Select Committee, of which Valerie is a member, heard evidence from John Appleby, Chief Economist, King’s Fund, Anita Charlesworth, Chief Executive, Health Foundation, and Nigel Edwards, Chief Executive, Nuffield Trust, as part of the Committee’s inquiry into public expenditure on health and social care.
Valerie said:
“The Better Care Fund, worth £3.8bn, was set up to ensure a transformation in integrated health and social care. I asked Ms Charlesworth if the Fund can get back on track or what needs to be done to improve it. Ms Charlesworth told me that the fundamental premise behind the Better Care Fund is that integration is cost saving, which it might not be, but it is likely to be quality enhancing. It was assumed that some of the benefits would be seen straight away, but this has not been the case and is not realistic.”
“Nigel Edwards told me that the lesson from the Better Care Fund was that it was not a very efficient way of managing large-scale change. While the Fund has worked in some areas, Mr Edwards said that he feared that the Fund would not work terribly well in quite a lot of places.”
“The Department of Health’s own figures show that GP spending has fallen by £400m, but the HSCIC has said there is an increase. This is at a time where demand has continued to increase. I asked who was right on these figures. Mr Edwards said he was perplexed by the two figures and had not been able to work out the difference. However he said he wrote to the Department of Health and they are investigating. Mr Appleby told me he has been trying for two months “to get to grips” with funding GPs. I asked about the funding implications to GPs generally while the work load is going up. It was clear that there is limited information available aside from the number of ‘300 million-plus’ GP appointments each year.”
“When I asked where I could get information about GP locums, particularly how many there were in the NHS, the panel were not able to tell me how many there were as this information is not held centrally.
More information of the Health Select Committee’s inquiry into public expenditure on health and social care can be found here: http://www.parliament.uk/business/committees/committees-a-z/commons-select/health-committee/inquiries/parliament-2010/public-expenditure2/