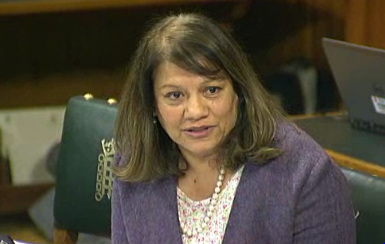 On Tuesday 9 December 2014, the Health Select Committee, of which Valerie is a member, heard evidence for the Committee’s inquiry into Public Expenditure from the Rt Hon Jeremy Hunt MP, Secretary of State for Health; Una O’Brien CB, Permanent Secretary, Department of Health; Richard Douglas CB, Director General, Finance and NHS, Department of Health; and Simon Stevens, Chief Executive Officer, NHS England.
Valerie said:
“There has been confusion on where the extra £700m to allow for winter pressures has come from. I asked if there would be any staff cuts to pay for this £700m injection to the NHS. I was told that the NHS plans to reduce the administration staffing numbers in the system. While the extra funding is welcome, there is criticism of the non-recurring money that is recurring every year. In A and E there seems to be a big problem with recruitment and retention of doctors. I was told by the Health Secretary that they are having a discussion with NHS England about whether this is the best way of helping the NHS to cope with winter pressures.”
“I am concerned about the accountability of the NHS. I asked the Secretary of State for Health, who should be accountable for the running of the NHS who asked the Chancellor for increased funding. I was told that both the Health Secretary and the Chief Executive of NHS England held meetings with the Chancellor, ‘Both separately and together’, to secure the increased funding. The House of Commons cannot hold the Chief Executive of NHS England to account for the running of the NHS in the same way as MPs can with the Health Secretary. The Health Secretary had to be summoned to the House of Commons following the launch of NHS England’s Five Year Forward View on Radio Four’s Today Programme. The Secretary of State often says ‘It is up to NHS England,’ so Members of Parliament do not always get the answers that we want.”
“The NHS is increasingly handing care contract to private providers. The Chief Executive of NHS England had previously told the committee that 6% of NHS services were provided by private organisations. However, the King’s Fund, the Nuffield Trust and the Health Foundation said that this figure was almost 11%. Mr Stevens’ explanation of this difference left a gap of 2%. I have asked that the Committee writes to Mr Stevens to allow him to clarify his comments.”
“The Secretary of State told me that the decision to freeze NHS staff pay was a taken on the basis of what was right for patients and is what front-line nurses would have wanted. I do not agree with his position. Following on from my point, Grahame M. Morris MP raised concerns that NHS staff have felt the need to take industrial action owing to this sustained period of pay freeze. Efficiency savings in the NHS cannot be found by freezing pay for staff. NHS England need to resolve this issue which Scotland and Wales have already managed.”
More information of the Health Select Committee’s inquiry into public expenditure on health and social care can be found here: http://www.parliament.uk/business/committees/committees-a-z/commons-select/health-committee/inquiries/parliament-2010/public-expenditure2/