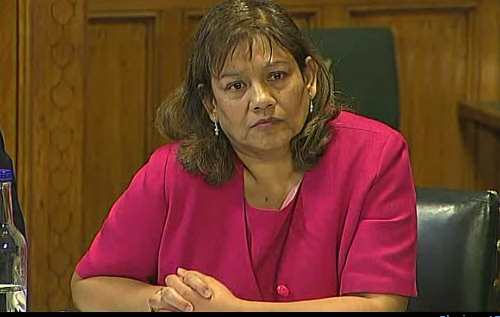 On Tuesday 12 November 2013, The Health Select Committee, of which Valerie is a member, heard evidence from Norman Lamb MP, Minister of State for Care and Support, Department of Health, on management of long-term conditions.
Valerie said:
“I asked the Minister what considerations he took into account when selecting the pioneer sites, launched by the Government in September to showcase integrated health and social care, and whether they received any money for it. He replied that the Government did not offer any extra money. 99 areas of the country came forward wanting to do it. He said that the government set a number of criteria about whole system integration and invited expressions of interest, narrowing it down to a shortlist of 28. A panel was set up, which included international representatives – someone from Kaiser Permanente, someone from Sweden and someone from New Zealand. I asked the minister whether there were any patients or carers voices on this international panel and he replied that ‘I do not think there were any involved on the panel itself.’ It is that patients’ voices were overlooked in the selection process.”
“I raised the issue of Torbay Care Trust, a successful pilot for integrated care formed in 2004, asking the minister why it is taking so long to roll out this integrated service everywhere else. He replied that while you have fantastic practice, you also have people who just fail to follow the best practice. The minister explained that it is often quite difficult to translate brilliant practice like Torbay across the system. “
“When I asked the minister about section 75 regulations, which explicitly open the NHS up to competition law and how this fits in with integration he did not provide a response.”
“I then asked the minister what mechanism will be used to pull together the best practice for pioneers because they all seem to be doing different things. He replied that that is very deliberate, and that he expressly wants diversity. He explained that he does not want to impose a model to say, “This is the way to do it, He said he wants clinicians and managers empowered at a local level to develop their thinking.”
“I pressed the minister on how the consistent themes and examples of best practice among pioneers will be pulled out and disseminated. He responded that there will be evaluation from the start. It will not be a question of us publishing a report in five years. There will be a constant dissemination. When I asked the minister when we can expect the first lot of dissemination of information he said that he wants it to be constant, creating a sort of virtual network.In my view there shoudl be a better way of disseminating the information at a specific time otherwise it would be difficult to measure the progress. ”