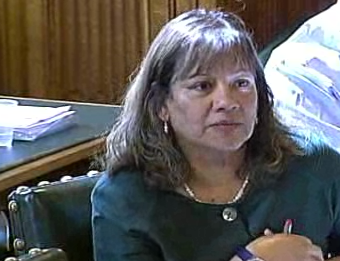 The Health Select Committee heard evidence from an ambulance trust and the Chair of the Royal College of General pratitioners, Dr Clare Gerada.

Valerie said:
“I asked about whether there is sufficient training currently amongst paramedics to make decisions about whether patients should go to A&E based on telephone calls. The response was that more could be done. Dr Anthony Marsh said that while paramedics are well trained to cope with emergency situations, more paramedics need to receive additional training to cope with primary care type issues.”
“I referred to the incident in July 2012 at Manor Hospital where a man collapsed outside A&E but was ignored by paramedics and hospital staff and died. I asked what was missing there and how it could be prevented. The reply was that this was a serious but isolated incident and that they had re-affirmed values of the staff. I was concerned that I was not given details about steps taken to stop this from happening in the future.”
“Ambulance services are given an 8 minute time frame in which to respond to emergency calls, I asked how useful this is in terms of local response. I was told that whilst this helps Ambulances to prioritise, some patient groups don’t always need an 8 minute response. If there are too many priorities, really sick patients may get lost amongst patients who don’t need as prompt a response.”
“There is evidence to suggest that delays in handover at hospitals are because clinicians don’t trust paramedics. I was told that delays in handover are often because of changes in patient condition and availability of beds”
“The headlines which have formed the current debate, are about numbers, but it is not clear what they mean. People might not be so fearful about what is happening if they are better informed about numbers. I was told that the figures are complicated by zero hour admissions, where elderly patients and children are unofficially admitted to A&E. The experts agreed that the system should be integrated around people and not numbers.”
“When I asked about continuity of care in the setting up ‘Out of Office hours services’, the primary care experts agreed that the two key issues which need to be dealt with as a priority are fragmentation of care and continuity of care.”

The full recording of the Health Select Committee Evidence Session on Emergency Services and Emergency Care on 4 June 2013 can be found here: http://www.parliamentlive.tv/Main/Player.aspx?meetingId=13209