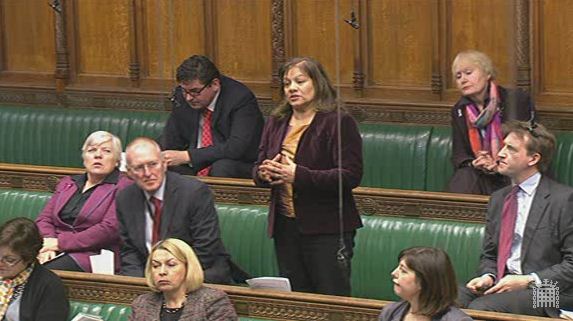 On Wednesday 16 January 2013, the Health Select Committee of which Valerie is a member published its report “National Institute for Health and Clinical Excellence (NICE)”. The report found that decisions were needed urgently on the Government’s new drugs pricing regime, that an assessment should be made of the outcomes for those patients whose treatment has been paid for through the Cancer Drugs Fund and welcomes the fact that NICE is to take on responsibility for producing clinical guidance and quality standards in relation to social care.

“One of the Committee’s key findings is that there needs to be a proper assessment of what benefits the Cancer Drugs Fund has brought, with those benefits being applied to the treatment of other conditions, as well as providing a clear mechanism for the future funding of treatment for patients whose drugs have been paid for from the Cancer Drugs Fund.”

“There is uncertainty about the implications of the changes proposed for the Cancer Drugs Fund which was introduced by the Government in 2011 to allow clinicians to use drugs that had not been approved by NICE, and which will be superseded by the value-based pricing system.”

“The Committee recommends that there should be an assessment of the outcomes for those patients whose treatment has been paid for through the Cancer Drugs Fund. At Health Questions on 15 January 2013, I asked the Secretary of State how the Government would assess the impact of the Cancer Drugs Fund on overall cancer survival rates.”

“While the Secretary of State responded that this would be easy because the Cancer Drugs Fund only started in 2010, he has failed to recognise that the effect of the Cancer Drugs Fund on survival rates cannot be isolated by comparing cancer survival rates before and after its introduction. To do so disregards the possibility that changes in survival rates may result from other unrelated factors. Given the possible effects, both positive and negative, on patients and given the amount of public money involved, I hope the Secretary of State will ask for a more sophisticated assessment of the effect of the Fund on patient outcomes than the one he described in response to my question.”

“The Committee also expresses concern about the implications for the effectiveness of NICE of recent evidence about access to information from clinical drugs trials. The Committee argues that there should be both a professional and legal obligation to ensure that all regulators, including NICE, have access to all available research data about the efficacy and safety of pharmaceutical products which are in use in the UK.”

“One of the key themes of the Committee’s work in this Parliament has been the need to move to a more integrated system in order to maintain both quality of care and access to care. It therefore welcomes the fact that NICE is to take on responsibility for producing clinical guidance and quality standards in relation to social care. The Committee argues that there is a real opportunity for NICE to help evolve a different model of care by creating integrated standards and clinical guidance.”

The Health Select Committee’s Report can be read here.