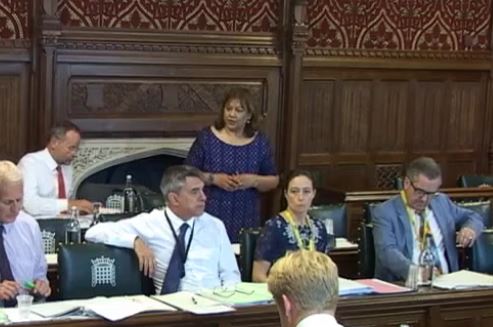 I asked the following questions:

Valerie Vaz MP: Is there sufficient clarity in the Bill on where postgraduates sit, or returning students, or students who are perhaps—as my colleague mentioned—slightly older and do not fit the profile of a normal young student?

Valerie Vaz MP: Can you say specifically where in the Bill it is captured?

Valerie Vaz MP: It is good to see you Minister. Presumably the Secretary of States didn’t think that this was an important meeting, so they sent you along, but this is within your expertise, isn’t it? I had to get that on the record. Minister, you have said you have been working on this for 14 months. Every single person who presented the Bill has now changed—

Joseph Johnson: Apart from me.

Apart from you—you are the only one who is left. Everybody else has changed. Given that we now have two Secretary of States and machinery of ​government changes, that we had an important vote on 23 June, and that, as you have heard, there are 150 amendments, is this not a good time to pause the Bill?

Valerie Vaz MP: I beg to move amendment 119, in clause 1, page 1, line 5, leave out “Office for Students” and insert “Office for Higher Education”.

Valerie Vaz MP: Thank you, Mr Hanson. It is a pleasure to serve under your chairmanship. My amendment is intended to be helpful; obviously, if Members do not like what I say, they can just trash me in the press. “Office for Students” is a misnomer. First, this body is not about being an office for students; as various clauses make clear, the body is about registration and regulation—a registration procedure—and not about students. It is certainly not about having students as part of the office for students.

Secondly, from the written and oral evidence given to the Committee, the situation of postgraduate students has clearly not been acknowledged or mentioned in setting up this body, and, with the new changes in the Government, we now have two responsible Departments. Postgraduates do a fantastic job of not only research, but teaching, so they are split between the two. There is a gap there, which has been acknowledged. Postgraduate students have to be somewhere in the Bill.

Furthermore, there is nothing about subject-specific support—the strategic and vulnerable subjects, which require a higher level of funding. That is why I say that this body is not about students. There is nothing about skills, the skills deficit or protecting the STEM subjects of science, technology, engineering and maths. I liken the office for students to the Care Quality Commission. This is like calling the CQC the “office for patients” when its responsibility is not actually about that, but about regulating healthcare providers.

The office for students appears to set up regulation and registration processes. We can see in the Bill a power to impose monetary penalties and a power for the suspension of registration. Higher education providers will have to pay for the benefit of being part of the register. If we continue to look through the Bill, we see clauses titled “De-registration by the OfS” and “De-registration by the OfS: procedure”. Higher education providers are going to be spending all their time on bureaucracy, and all that money will be taken away from front-line services—away from the students themselves. That is why I say, again, that it is not about students.

According to clause 2(2), the Secretary of State has to give guidance. Again, there is no clarity. We need to change that, because we now have two Secretaries of State. If the OFS was for students it would be about fees protection, because students who were having to face bills of £27,000 are now being provided with invoices for £45,000. It would also be about students’ wellbeing, the skills shortage, retraining, returners, and all those people who do not classify themselves as students as we imagine them to be. Our time as a student is actually a very short part of our lives. There are people who do not fit the student mould, yet who will be students at some stage during their lifetime.

I want to pick up on the Minister’s remarks earlier about my being the only one who wants to pause the Bill. I do so because I am a lawyer, and was a Government lawyer. It is important to have clarity on the face of the Bill. Currently, that is not the case. The Minister helpfully ​told us that he has been living with the Bill for 14 months. I sympathise with him on that, but there have been a lot of changes, not least the new grammar school policy that might be coming through. What happens at the early stages of education filters up. The abolition of the Office for Fair Access and what happens to young people as they go through the education system will have a great impact. I know that it is not part of the programme motion, and I have been told that we cannot discuss this, but what happened on 23 June is vital. I say again that the machinery of Government changes.

There is no clarity on the face of the Bill. “Office for Students” is a misnomer. I would prefer to work with the Minister to find another way to describe the body, not least because it is not about students.

Valerie Vaz MP: The stakeholders may not have asked for it, but that does not mean that people cannot have an idea of their own, take soundings or look at the face of ​the Bill and see what strikes them. I have not missed the point, as the Minister said, because clause 2(1)(b) says that the OFT is needed “to encourage competition between English higher education providers in connection with the provision of higher education”.

Anything to do with students, universities or higher education is also about collaboration and public good. I wanted to flag up the fact that the name, as it currently stands, does not incorporate the idea of putting students at the heart of it, for reasons that I will not go through again. It is open to very clever civil servants to come up with something that reflects this debate. With that, I beg to ask leave to withdraw the amendment.