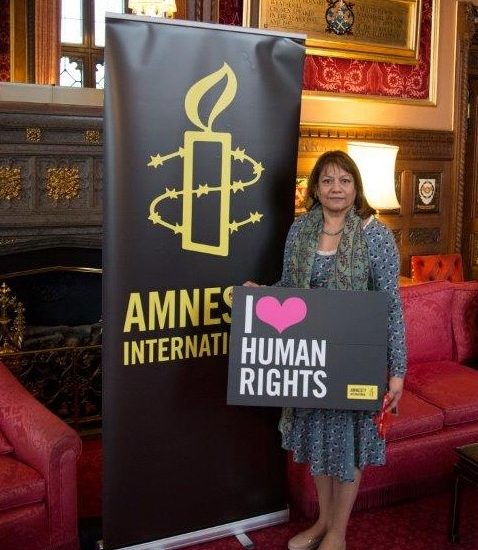 On United Nations’ Human Rights Day we should not only celebrate our freedoms but also speak out against the injustices and abuses suffered by many around the world. In the House of Commons I raised Human Rights Day and we remembered our actions that freed Albert Woodfox, who was held in the USA for over 43 years in solitary confinement, Phyoe Phyoe Aung in Burma, and Yecenia Armenta Graciano, who was detained and tortured in Mexico. They all said on their release that that was a result of the role played by Amnesty International.
Amnesty International’s Write for Rights was launched by Mr Speaker and Ann Clwyd MP, Chair of the all-party group on human rights. At the meeting we heard from Issa Amro, a Palestinian human rights activist who faces a prison sentence for peacefully protesting against illegal Israeli settlements.
Write for Rights encourages people around the world to send personal messages of support to people behind bars, or whose lives are in danger, simply for exercising their Human Rights.
This year Amnesty International has called on us all to write to its Turkey director İdil Eser and chair Taner Kılıç and nine other Turkish human rights defenders, which I have done. As a lawyer I am also concerned by the treatment of Azza Soliman, an Egyptian lawyer who is facing imprisonment for her work defending victims of domestic abuse, rape and torture in her country. I have written to Azza Soliman to show my support. These personal messages to people who are suffering injustices show them that they are not alone in their struggle.
The Human Rights Day parliamentary event has a special focus on supporting people around the world who are risking their lives to defend human rights. Amnesty has recently documented the staggering levels of danger these individuals are under: since 1998, 3,500 human rights defenders have been killed.
I know my constituents are very concerned about Human Rights and I’m encouraging them to send a personal message of support to those who are suffering injustices. These messages can be sent via Amnesty International’s website: https://www.amnesty.org.uk/write-for-rights