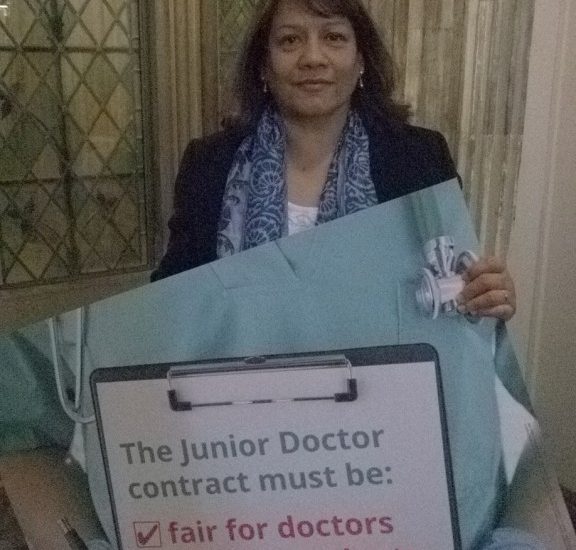 On 28 October 2015 I voted for HM Opposition Labour Party motion calling on the Government to guarantee that no junior doctor will have their pay cut as a result of a new contract and calls upon Government to withdraw the threat of contract imposition. Unfortunately it was defeated by the Government: Ayes 260- Noes 301.

The full text of the motion is set out below:

“That this House notes the stalled discussions between Government and the British Medical Association (BMA) about a new junior doctor contract; opposes the removal of financial penalties from hospitals which protect staff from working excessive hours; urges the Government to guarantee that no junior doctor will have their pay cut as a result of a new contract and calls upon Government to withdraw the threat of contract imposition, put forward proposals which are safe for patients and fair for junior doctors and return to negotiations with the BMA.”

I am alarmed by the Health Secretary’s handling of the junior doctor contract dispute which has caused unnecessary anger and is now a possible threat to the recruitment and retention of NHS staff. The new contract must be safe for patients and fair for junior doctors. I am particularly concerned that the current proposals will remove the safeguards that penalise hospitals who routinely force junior doctors to work in excess of their contracted hours and cut pay for those doctors currently work evenings and weekends, putting the delivery of a 7-day NHS at risk.

The BMA is in an ongoing dispute with the Government and NHS Employers regarding proposed reforms to the junior doctors’ contracts. The Government has recently provided some assurance on the issue of pay but we are yet to see enough detail and continue to ask for assurances on key areas for negotiations.

I have also signed an Early Day Motion (EDM 539) which states:

“That this House recognises that junior doctors are dedicated professionals who are the backbone of the NHS, providing the best quality care for their patients; believes it is essential to ensure a contract that is safe for patients, junior doctors and the NHS; supports the view of the BMA’s Junior Doctors Committee that the best outcome for junior doctors is a contract agreed through genuine and meaningful negotiations and therefore calls on the Secretary of State for Health to drop all preconditions; further believes it is essential that proper hours safeguards are introduced to protect patients and their doctors, together with proper recognition of unsocial hours as a premium time, and an agreement that work on Saturdays and late evenings cannot be considered the same as daytime on a weekday; believes there should be no disadvantage for those working unsocial hours compared to the current system, nor for those working less than full time and taking parental leave; is concerned that the NHS Trust’s responsibility to monitor the number of hours worked has been withdrawn and urges its reintroduction; further recognises that junior doctors already work seven days a week for emergency work, and that the barriers to extend that to non-urgent elective work are the lack of complementary services, for example social care packages and pharmacists, not doctors’ working patterns; and urges the Secretary of State to accurately reflect this reality in his statements, to work to restore morale within the NHS, and to bring an evidence-based approach to renewed negotiations.”

Update: On 4 November 2015 the Secretary of State for Health issued a Written Statement on the Junior Doctors’ Contract.

The Written Statement informed the House of Commons that a new contract has been published by NHS Employers and argued that the new contract “would not remove a single penny from the junior doctors’ pay bill, and we would maintain average earnings for junior doctors. The proposals offer an 11% increase to basic pay, with further increases linked to progressing through training and taking on roles with greater responsibility –instead of being based on time served.”

However, the BMA have rejected the offer as this does no not assuage their fears. Dr Johann Malawana, chair of the junior doctors committee, said: “The proposals on pay, not for the first time, appear to be misleading. The increase in basic pay would be offset by changes to pay for unsocial hours, devaluing the vital work junior doctors do at evenings and weekends. While in the short term existing junior doctors may have their pay protected, protections will only exist for a limited time.”