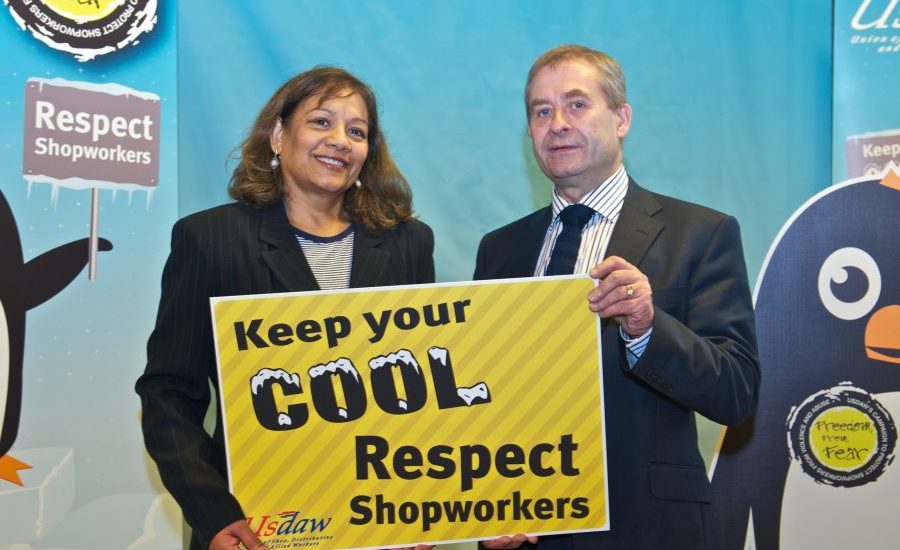 On Wednesday 16 October 2013 Valerie Vaz, MP for Walsall South, joined members of retail union Usdaw in Parliament to campaign for greater respect for shopkeepers. The campaign follows the Government’s decision to block an amendment to the Anti-Social Behaviour, Crime and Policing Bill to make an assault on a worker an offence.
Valerie Vaz MP said:
“Too often retail employees are confronted with violence, threats and abuse and it is vital we ask people to show shopkeepers the respect they deserve.”
“I voted for an amendment to provide stiffer sentences for offenders, making the assault of a worker serving the public an offence in its own right. Workers are being assaulted and the perpetrators of the crimes are given relatively lenient sentences.”
“I have heard examples such as a man that was given a suspended sentence for assault. While he was out celebrating his lenient sentence he launched into a racist attack on a female shopworker. He assaulted her by pulling out chunks of her hair, but yet again walked free from court. Cases such as this must end.”
John Hannett, Usdaw General Secretary, said:
“We are very grateful to Labour MPs like Valerie Vaz who support out campaign to keep our members safe at work.”
Further Information:
The House divided on the motion for increased sentences: Ayes 224, Noes 286.