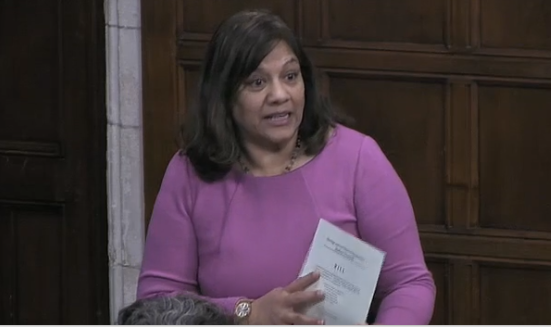 I attended a Westminster Hall on Marriage Registration Certificates on Tuesday 8 December 2015 secured by Christina Rees MP ( Neath). Since 1837 marriage certificates in England and Wales have included the names of the fathers, but not their mothers. Women are being excluded from historical records- this is simply unacceptable in modern society. The Prime Minster promised to address this inequality over a year ago but little progress  has been made.

I signed EDM 446 calling on the Home Secretary to make the necessary legislative update without further delay.

Below are my interventions on the debate:

Valerie Vaz:  The right hon. Lady is making an interesting point. That, in fact, happened to me. My father died when I was a teenager and I could not put my mother’s name on the marriage certificate. I had to have a deceased parent on it, which is slightly strange. It seems that the Bill of my hon. Friend the Member for Neath (Christina Rees) is already on the table and we could be debating it, so could the points made by the right hon. Member for Meriden (Mrs Spelman) not be included as amendments when it is in Committee?

Mrs Spelman: That is certainly one way of doing it. I will need to look closely at the Bill tabled by the hon. Member for Neath. I would be more than happy for us to work together. It would be good if all of us who have sought to bring about the change support it on the Floor of the House. That is our endeavour, and it is what we should seek to achieve.

Valerie Vaz: The right hon. Lady is being very patient in giving way. Again, I put it to her that an actual Bill is being drafted by specialists in the House. That Bill covers all the points and has cross-party support, and it would be a wasted opportunity not to have this debate in Committee.

Valerie Vaz: My hon. Friend is making an important point about the Bill that she introduced. Does she agree that it is a matter for the Government to discuss the details of the Bill, just as elements of my 10-minute rule Bill have been accepted into primary legislation? Points made by the Second Church Estates Commissioner, the right hon. Member for Meriden could also be incorporated, either in discussions with the Government or certainly after Second Reading.

Christina Rees: I agree totally. It can be discussed and agreed in due course, because there is widespread support in this debate for the measures. The sooner we get on with it, the better. The reason why we want to put the change into primary legislation is that, as a regulation—as it is in respect of civil partnerships—it could be changed at any time. We need to cement the regulation relating to civil partnerships as well.

As the right hon. Member for Meriden said, the Bill is the result of a long campaign. A petition in January 2014 on change.org in January 2014 collected more than 70,000 signatures. A campaign on Twitter followed with the hashtag #MothersOnMarriageCerts, which had heavy coverage from the BBC, the Telegraph’s Wonder Women journalists and the New Statesman, which is a varied segment of the press to be supporting such a change. In August 2014, campaigners pressed the Prime Minister on the issue, and he agreed that it was high time the system was updated.

Valerie Vaz: I suppose I should declare an interest as well, as the mother of a 21-year-old daughter. However, to pick up the point about party politics, I should add that the civil service is independent. As my hon. Friend the Member for Caerphilly (Wayne David) said, there was a White Paper somewhere in the bowels of the civil service, and change was about to be made to the Regulatory Reform Act 2001. However, the Bill introduced by my hon. Friend the Member for Neath (Christina Rees) is now on the table, and it has cross-party support. Therefore, this debate did not have to happen—the machinery, the process and the legislation are already there.

Tulip Saddiq: I agree with my hon. Friend. As I said at the beginning, I am grateful to the right hon. Member for Meriden for calling the debate, because this is an important issue. I am pleased that men and women from different parties are here today, which reflects how passionately we feel about this issue.

Finally, I have a few points. This issue may seem simple when compared with other issues.