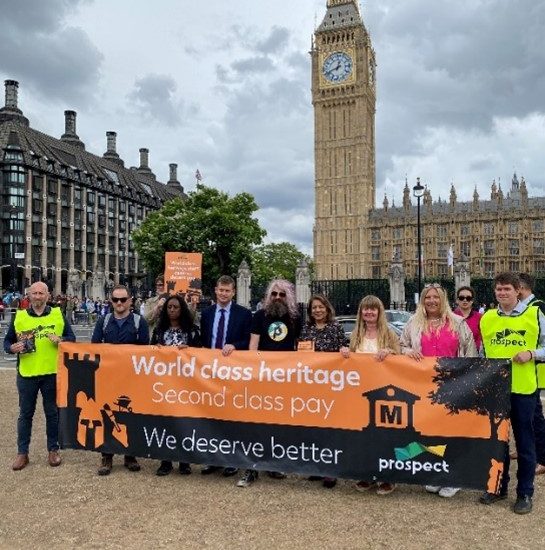 “World Class Heritage…Second Class Pay” was the title of the lobby of Parliament by members of the Prospect Union on Thursday 30 June 2022. I spoke to members of the Union in Parliament Square. They told me that Heritage is a vital part of the UK Economy- the value it adds to our economy is comparable to agriculture, film and TV production or the motor industry. It attracts 13 million international visitors a year spending over £7bn.

Museums, libraries and heritage sites have been shown to improve individual health and wellbeing, support education and social inclusion and boost local pride and community cohesion. One study found that people attending museums or libraries were 20 per cent more likely to report good health. Four in five people say that heritage sites and projects make their town or city “a better place to live”.

Despite the majority of roles requiring graduate or post graduate qualifications, most heritage workers are paid below the national median salary of £31, 285 and many are on very low pay. Examples from 2022 include:

Official data indicates that close to one in ten museum jobs and one in five jobs in botanical gardens and historical sites pay less than the independently calculated Real Living Wage of £9.90 an hour.

The Prospect workers are calling for greater value and recognition to heritage workers with improved funding to address historic low pay levels and the current cost of living; wages should reflect skills, qualifications, knowledge and experience and meaningful pay progression. We must support them.