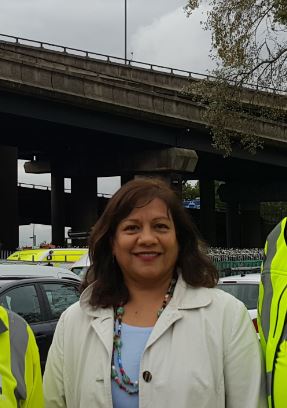 I met with representatives of Highways England and Kier on 5 October 2015 to discuss the ongoing closure of Junction 9 of the M6.
I was astounded by the way the meeting was conducted. I expected to be able to work constructively with Highways England to identify ways to improve the situation for my constituents but the representatives of Highways England present seemed only to be interested in defending the decisions they had already taken. They did not seem interested in my local knowledge or that of my constituents.
I was only told at the end of the meeting, and after I asked, that the slip road will now remain closed until Christmas and that a press release would be issued in “half an hour”. This was cynical in the extreme and not the way to treat an elected representative.
There has been what looks like a degree of obfuscation about the reasons for the delays. At the meeting I was told that the degradation to the concrete was far more severe than expected. I was also told that it was only possible to work on small sections of the road at a time in order to ensure the integrity of the structure. However, this contradicts the account given in the Highways England press release issued after the meeting, which stated that the problem was not that the concrete had degraded more than would be expected, but that the areas where the degradation was most severe were the areas that were most crucial to the integrity of the structure.
It is surprising that the date for the completion of the works has been delayed on at least three occasions and by a total of six months. This is more than twice the amount of time the works were initially scheduled to last. It is also concerning that the roadway was allowed to degrade to such an extent. Moreover, I would have expected that engineers at Highways England would have better knowledge of the degradation of concrete and be able to better predict the state it will be in when assessed during repairs.
At the meeting I put forward an alternative suggestion for traffic management during the work. Junction 9 could be reopened and the Junction 8 Western Arm could be closed completely. Traffic heading from the Southbound M6 to the M5 could then be diverted via Junction 7 of the M6 where it could cross onto the northbound carriageway of the M6 and enter the M5 using the Eastern Arm. I note that this is already a diversion route for heavy vehicles.
Traffic heading from the southbound M6 to the northbound M6 at Junction 7 would remain in lane and would not need to cross any other traffic owing to the unusual layout of the junction. Additionally, local traffic on the A34 crossing the M6 at Junction 7 does not enter the Junction but rather uses a flyover.
A further benefit of this suggestion is that traffic would be less likely to queue past Junction 10 of the M6, causing delays on the Black Country Route between Walsall and Wolverhampton. It was agreed at the meeting that Highways England would carry out traffic modelling on this suggestion.
I am now writing to the Chief Executive of Highways England to ask for the slip road to be reopened as soon as possible.